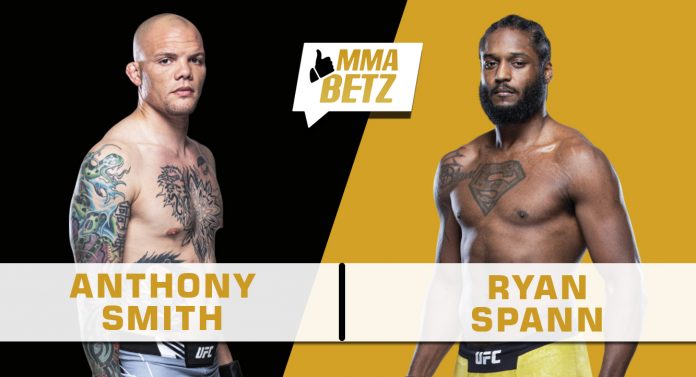 UFC Vegas 37 goes down this weekend at the UFC APEX in Las Vegas. In the main event, light heavyweights Anthony Smith and Ryan Spann face off in a top 15 showdown.

Smith is on a two-fight winning streak, with victories over Jimmy Crute and Devin Clark at UFC 261 and UFC Vegas 15 respectively. Spann has won five out of his six fights in the UFC, with his most recent win coming against Misha Cirkunov at UFC Vegas 21.

Both Smith and Spann are very good in all areas. Experience-wise, ‘Lionheart’ has the upper hand as he has been involved in more than fifty professional MMA fights, but Spann is more speedy, explosive, and powerful.

In the grappling department, both fighters are very even skills wise, but Spann is more active on the mat. Spann averages nearly two takedowns per 15 minutes, while Smith averages 0.5. Spann also attempts more submissions than the Nebraska native. Smith has thirteen submission wins to his name, while Spann has 11.

While many believe Smith’s days as a title contender are long gone, he will be out to prove his critics wrong, but Spann will also be looking to score a signature win and cement his place as a serious title contender. All in all, Spann will use his speed and explosiveness to cause Smith problems and earn a stoppage win on the night.

Who do you think wins the UFC Vegas 37 main event between light heavyweights Anthony Smith and Ryan Spann?