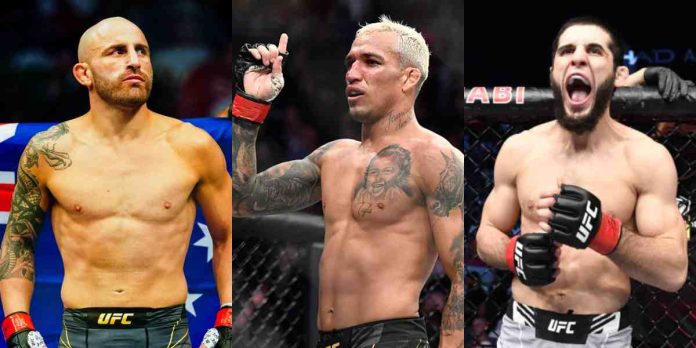 Eugene Bareman has explained why he believes Charles Oliveira would be a tougher fight than Islam Makhachev for Alex Volkanovski.

Volkanovski is coming off a dominant victory over ‘The Korean Zombie’ at UFC 273, where he made his third successful title defence, and will face Max Holloway in their trilogy at UFC 276. Should he score a third successive win over the former champ, it is likely that the Aussie will try his luck at lightweight, and if that happens, he’d have to face the likes of Oliveira and Makhachev.

Speaking to Submission Radio (as transcribed by BJPenn.com), Volkanovski’s coach Bareman said that Oliveira would be a tougher fight than Makhachev, although the latter would be a tough test as well.

“Oliveira’s the more difficult match in my opinion,” Bareman said. “Again, it just depends. Oliveira has a more well-rounded skillset, so there’s more to deal with. I mean, Islam’s got good stand-up, but that just depends on who you are looking in, I guess. But yeah, I just think Oliveira would be a more well-rounded skill set for Volk to deal with. Whereas Islam, perhaps we could narrow a couple of things down and concentrate on those few things. Which is easier said than done, because just like in much the fashion of Khabib, Islam excels. He may only do one or two aspects of the sport really, really well, but he does them at the highest level. So, that’s the difficulty.”

Oliveira most recently fought Justin Gaethje at UFC 274, where he won by first round submission but failed to retain his title after missing weight. The Brazilian is guaranteed a vacant title fight next however and Makhachev’s team is campaigning for him to be his dance partner.

How would Alex Volkanovski fare against Charles Oliveira and Islam Makhachev?