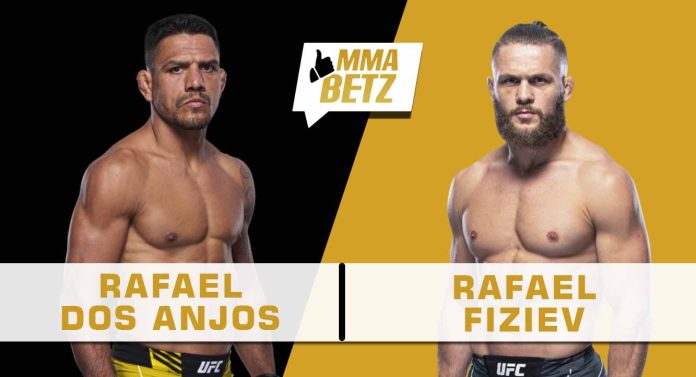 Dos Anjos is currently riding a two fight winning streak. Whereas Fiziev is riding a five fight winning streak, with his most recent win coming against Brad Riddell at UFC Vegas 44. Both men are looking to throw their name in the title mix with a solid win on Saturday night.

Dos Anjos is a very well-rounded fighter, who is a high volume striker, with great wrestling and top-tier BJJ. He also has tons of experience. Fiziev is a terrific kickboxer with explosive power and excellent defensive ability. The Kyrgyzstani will be extremely fast and efficient, especially early on and dos Anjos will have a tough time dealing with his pace. However, dos Anjos also isn’t a slouch on the feet, and should be able to grind down his opponent. The Brazilian is also very effective against the cage.

While Fiziev has the edge in striking, dos Anjos has the edge in grappling, and has better cardio, endurance and a lot of experience, which will help him in the later rounds. Expect the former champ to take a decision win home.

Who do you think will win the lightweight main event between Rafael dos Anjos and Rafael Fiziev at UFC Vegas 58?