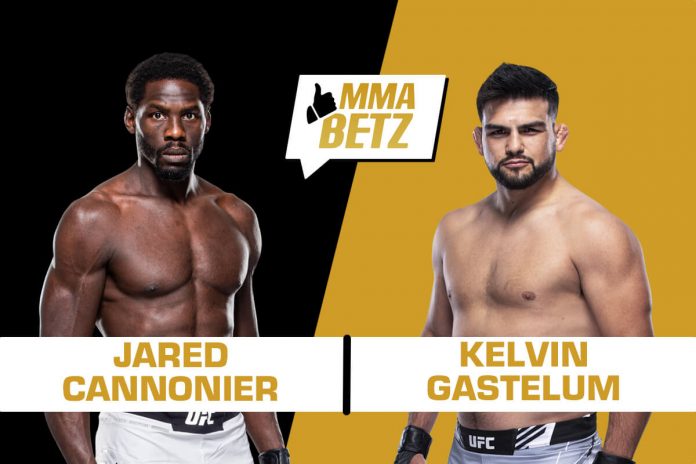 UFC Vegas 34 goes down this weekend at the UFC APEX in Las Vegas. In the main event, top ten middleweights Jared Cannonier and Kelvin Gastelum battle to move one step closer to the title.

Both men are coming off a unanimous decision loss to Robert Whittaker, and will be looking to bounce back into the win column. Cannonier has more to lose in this fight as he’s ranked number three in the division and is closer to a title shot than Gastelum, who is ranked number nine.

That being said, it’s also a crucial fight for Gastelum, who’s 1-4 in his last five fights, and is in a must-win situation.

Cannonier is the more polished striker compared to Gastelum, who’s extremely well-rounded. So we should expect an exciting fight.

Cannonier likes to use his strength, explosiveness and power to finish fights early. He’s 3-1 since moving up to middleweight, with one first round finish and two second round finishes. He will be looking to pick his shots and finish the job early at UFC Vegas 34, but Gastelum is very durable and dangerous. His boxing is crisp and he has vicious knockout power in his hands, so Cannonier should be careful.

Gastelum has the edge in the grappling department and he will have a lot of success if he chooses to wrestle as Cannonier doesn’t have a very impressive takedown defence. Gastelum also has been the more active of the two fighters in the last two years, is younger by eight years and has better endurance. The longer the fight lasts, the better it will be for him.

All in all, Gastelum will mix things up and earn a stoppage win on the night.

Who do you think wins the UFC Vegas 34 main event between Jared Cannonier and Kelvin Gastelum?