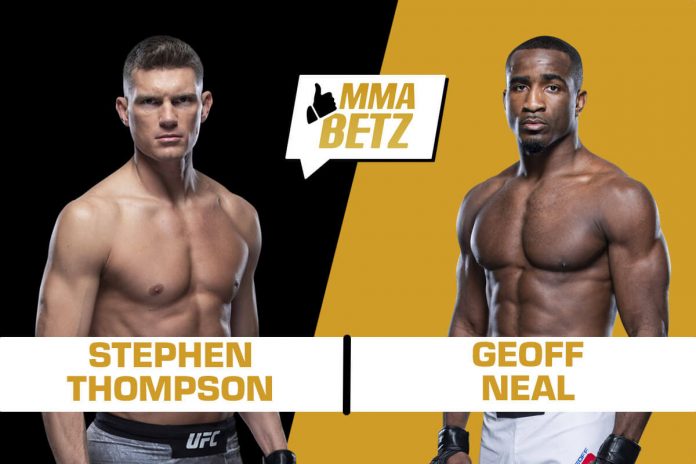 Thompson last fought in November 2019 against Vicente Luque at UFC 244, winning the fight via unanimous decision. While Neal fought a month later at UFC 245, taking less than two minutes to TKO Mike Perry.

Neal has racked up an impressive record of 5-0 in the UFC, finishing all of his opponents except for the gritty Belal Muhammad, who he beat via unanimous decision. Thompson has been on a difficult run as of late, with three defeats in his last five fights. While momentum is on the prospect’s side, ‘Wonderboy’ has tons of experience that will play a key role in this fight.

‘Handz of Steel’ is a ferocious striker, but he knows he is up against arguably the best striker in the UFC welterweight division. What plays into his advantage is that he is well-rounded and can take the fight anywhere. But his toughest task will be managing the distance against Thompson. With a sideways stance and his hands low, ‘Wonderboy’ constantly switches stance and is very light on his feet. He will use his movement and distance management to frustrate Neal, who will definitely be coming for the former title challenger’s head, charging forward with a KO in mind.

Initially, the fight was scheduled for three rounds in the co-main event, but with Khamzat Chimaev vs Leon Edwards being scrapped due to the Brit testing positive for coronavirus, Thompson vs Neal will now serves as the five-round main event, which is in the South Carolina native’s favour. Neal has never had a five-round fight in his career, whereas his opponent has been part of four five-round main events in his career, going the distance on all four occasions.

If Neal does not make quick work of Thompson, the latter will gradually grow as the fight progresses, using his movement, angles and distance management to tire his opponent out, and cruise to a decision victory.

What is your prediction for the UFC Vegas 17 main event between Stephen Thompson and Geoff Neal?