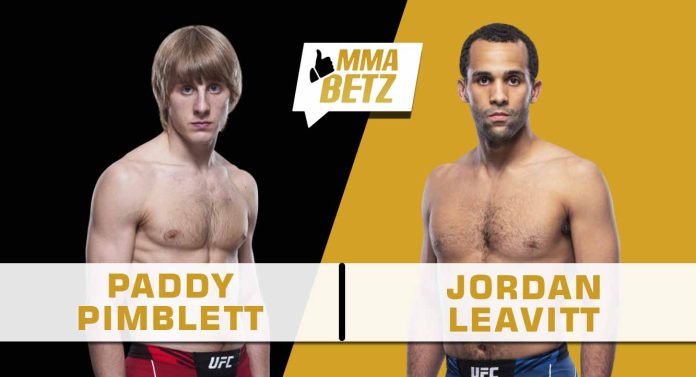 UFC London goes down this weekend at The O2 Arena in London, England as Paddy Pimblett takes on Jordan Leavitt in a highly anticipated lightweight fight.

Pimblett has made a fiery start to his UFC career, with back to back finishes. He most recently defeated ‘Kazula’ Vargas by first round submission at UFC London in March. The Brit is confident that he will make it look easy this weekend, but Leavitt is more than willing to ruin his plans, as he wants to “finish the fight, twerk, go home”.

Pimblett may not be the most skillful fighter in the world, but he makes things happen. He’s primarily a grappler, but his striking is very good as well. ‘The Baddy’ is extremely explosive and hits pretty hard. Leavitt is a solid grappler as well, but his striking isn’t as dangerous. He is very passive in his approach, and doesn’t hit as hard. He does have a good striking defence, however.

Statistically, Pimblett is the busier striker as he lands six significant strikes per minute on average, whereas Leavitt lands two and a half. Leavitt has a better defence however as he absorbs less than two significant strikes per minute on average, whereas Pimblett absorbs a little less than four. Both are very even in grappling as they average a little less than two takedowns per 15 minutes, although Pimblett has a slightly higher submission average.

The stage is set for Pimblett to produce another explosive performance in front of his compatriots and as good as Leavitt is, the Liverpudlian’s strength, intensity, and aggression are going to be too much to handle for him. Expect Pimblett to take advantage of Leavitt’s limited offence and secure a knockout win.

Who do you think will win the lightweight fight between Paddy Pimblett and Jordan Leavitt at UFC London?