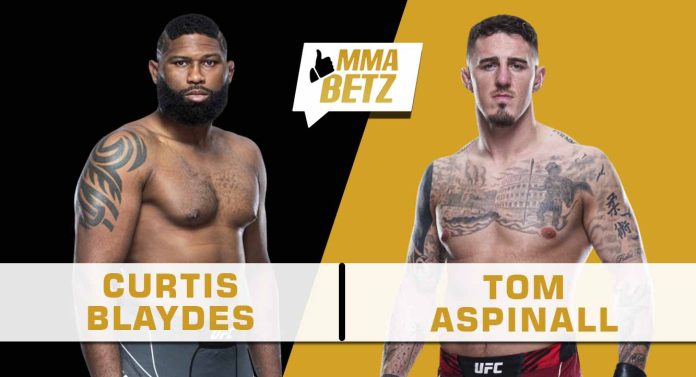 UFC London goes down this weekend at The O2 Arena in London, England. In the main event, Curtis Blaydes takes on Tom Aspinall in a crucial heavyweight matchup.

Blaydes is currently riding a two fight winning streak, with his most recent win coming against Chris Daukaus by second round knockout at UFC Columbus. Aspinall is 5-0 in the UFC, and is coming off a first round submission win against Alexander Volkov at UFC London in March.

Blaydes is the toughest test of Aspinall’s career, but he has all the qualities to pass it. The American is a fantastic wrestler, who is relentless with his takedowns, and vicious with his ground and pound. He’s also a decent striker and is constantly improving. Aspinall is a very well-rounded heavyweight. He’s a high-level grappler, and is one of the best strikers in the division. The Brit has sublime boxing fundamentals as well as pace and movement.

Often when Blaydes has fought superior strikers, he has relied on his takedowns and wrestling, but that can be dangerous against Aspinall, who is a solid submission artist. Aspinall also has an excellent takedown defence, so there’s no guarantee that Blaydes will take him down or control him on the mat.

Aspinall has better striking offence as he lands close to seven and a half significant strikes per minute on average, whereas Blaydes lands close to four. Blaydes absorbs less than two strikes per minute on average, whereas Aspinall absorbs less than three. Blaydes averages six takedowns per 15 minutes, whereas Aspinall averages four. Aspinall has better takedown accuracy and defence and attempts more submissions. Blaydes rarely attempts submissions.

If Blaydes can secure takedowns and control his opponent, he will most likely spoil Aspinall’s night, but expect Aspinall’s well-roundedness to secure him another win in London.

Who do you think will win the heavyweight main event between Curtis Blaydes and Tom Aspinall at UFC London?