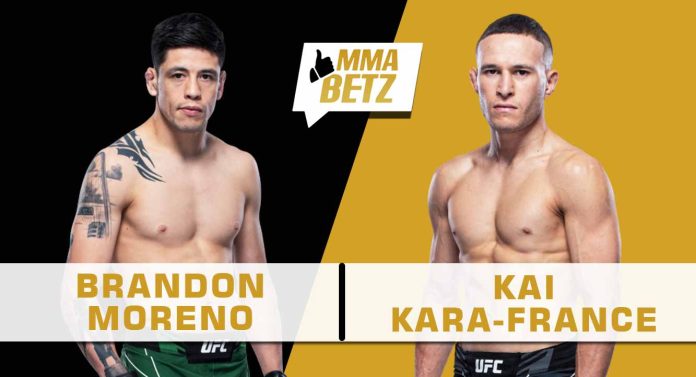 UFC 277 goes down this weekend at the American Airlines Center in Dallas, Texas. In the co-main event, former champion Brandon Moreno takes on Kai Kara-France for the interim flyweight title.

Moreno most recently fought at UFC 270, where he lost his flyweight title to Deiveson Figueiredo by a razor close unanimous decision, whereas Kara-France is currently riding a three-fight winning streak, with his most recent win coming against Askar Askarov at UFC Columbus.

Moreno is one of the best flyweights in the world and is pretty good everywhere. He is primarily a grappler, but can hang in there with the best strikers in his division as well. Kara-France is a fantastic striker with solid takedown defence. He also hits pretty hard. In their first fight in 2019, Kara-France had a blistering first round, but failed to maintain the pace as Moreno outworked him to a decision. Both have grown a lot since then, and it’ll be a very close fight.

The former champion will have the edge in grappling, but Kara-France will be a tough man to control on the mat. His takedown defence against Askarov, who’s considered one of the finest wrestlers in the division, was immaculate as he successfully stuffed 12 out of his 14 takedowns. Moreno is more experienced when it comes to five round fights and he can use his experience to his advantage and outwork his opponent again come fight night.

The fight is a coin toss at this point and can go either way. Expect Kara-France to edge out a closely contested decision.

Who do you think will win the interim flyweight title fight between Brandon Moreno and Kai Kara-France?