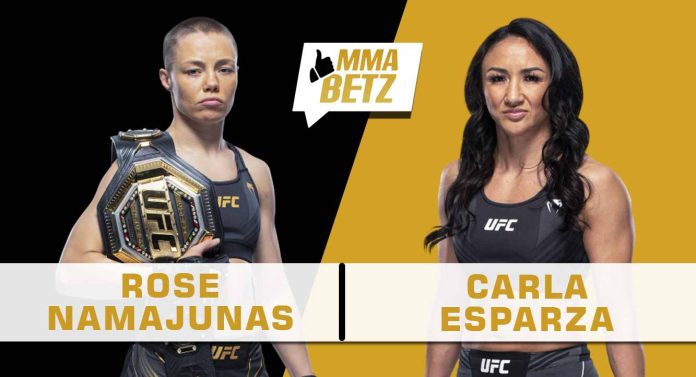 UFC 274 goes down this weekend at the Footprint Center in Phoenix, Arizona. In the co-main event, Rose Namajunas puts her strawweight title on the line in a rematch with Carla Esparza.

Not many people are giving Esparza much of a chance in this one, but she certainly has the skills to make things very tricky for the champion, who’s undoubtedly the best strawweight on the planet right now. When the two first fought, Namajunas was more of a grappler, but she’s one of the best strikers in the division now and is a very well-rounded fighter. Esparza is the best wrestler in the division, but she has also made improvements to her striking game over the past few years.

Namajunas certainly has the edge on the feet. She’s faster, lengthier, and more technical and will outstrike her opponent on the feet with considerable ease but Esparza is a tough cookie to crack and her constant takedown attempts are going to make the fight very interesting. Not only does Esparza have great takedowns, she also does a great job of controlling her opponents. Namajunas could get taken down and lose a round or two, but she’s very solid off her back.

Who do you think will win the strawweight title fight between Rose Namajunas and Carla Esparza?