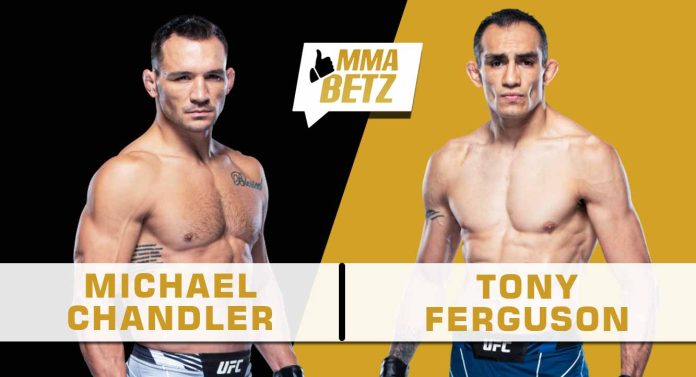 UFC 274 goes down this weekend at the Footprint Center in Phoenix, Arizona as former UFC interim lightweight champion Tony Ferguson takes on Michael Chandler in a must win fight.

Ferguson is coming off three consecutive losses to Justin Gaethje, Charles Oliveira, and Beneil Dariush, whereas Chandler is coming off back-to-back defeats to Oliveira and Gaethje. It’s a must win for both men, who are looking to bounce back into title contention.

Although Chandler is on a two-fight losing skid, he’s still very much a serious contender in the division. He was winning against Oliveira before he was caught off guard, while he had a barnburner against Gaethje. Ferguson however hasn’t looked the same since the brutal beatdown he suffered at the hands of ‘The Highlight’ at UFC 249. He looks aslower and less explosive than he once was. Chandler is still very explosive and is excellent in every department.

Ferguson’s very unpredictable, especially on the feet but he’s also a very lethal submission artist, although he struggled against world class grapplers like Oliveira and Dariush in his last two fights. Chandler has never been submitted in his career, and he’s a very solid wrestler, so if he fights smart and adopts a grappling-heavy approach, he will have a lot of success. But if he opts to stand and trade shots with Ferguson, it could go either way. Although Chandler’s speed and power will be tough to handle for ‘El Cucuy’, given his recent run of form.

Expect Chandler to win by knockout or TKO.

Who do you think will win the lightweight fight between Michael Chandler and Tony Ferguson?