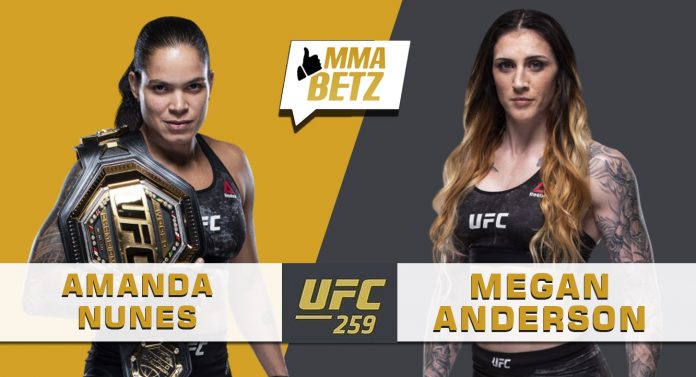 UFC 259 goes down this weekend at the UFC APEX in Las Vegas. In the co-main event, Amanda Nunes defends her featherweight title against Megan Anderson.

Nunes is a massive favourite against Anderson, and should the Australian somehow manage to win on the night, it will be the biggest upset in UFC history.

‘The Lioness’ is generally regarded as the women’s MMA GOAT, and her resume speaks for itself. Nunes is the only woman to hold two belts in the UFC simultaneously, and she is ruthless when it comes to defending her territory. She has won 11 consecutive fights, with notable wins over Ronda Rousey, Holly Holm, Valentina Shevchenko and Cris Cyborg. Anderson knows exactly what she has signed up for.

Skill wise, Nunes is levels ahead of her opponents, with the exception of Shevchenko, who has been the Brazilian’s toughest test in recent years. But Anderson has the tools to cause the champion some problems too. The Queensland native has a four-inch height advantage and a three-inch reach advantage, and can use her long frame to pose some sort of threat to the defending champion.

Anderson has knockout power in her hands, as she showed in her most recent fight against Norma Dumont Viana at UFC Norfolk, but she is outgunned in all areas. Not only is Nunes the faster and more fierce striker, she also possesses high-level grappling, which has proven to be the challenger’s achilles heel in the past, as she has lost two of her four fights via submission.

Anderson does have a puncher’s chance, but Nunes is just too good to lose unless her opponent pulls off a miracle.

Who do you think wins the featherweight title fight at UFC 259 between Amanda Nunes and Megan Anderson? 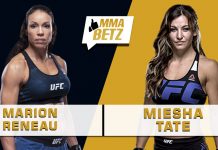