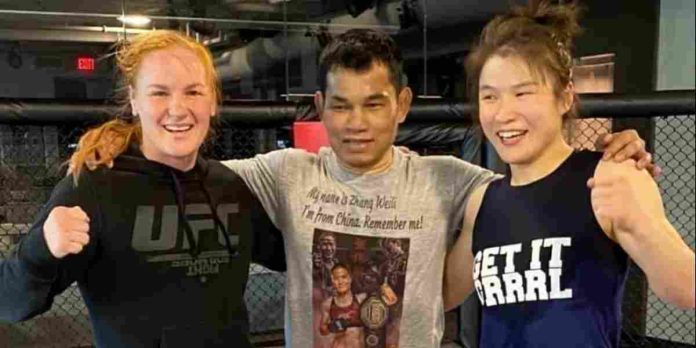 UFC strawweight champion Zhang Weili believes she’d give her flyweight counterpart Valentina Shevchenko a run for her money in a potential fight.

Zhang captured the strawweight title for the second time in her career by submitting Carla Esparza in the second round at UFC 281. She currently sits at the number three spot in the pound-for-pound rankings, a place behind Shevchenko, who is undefeated since making her move down to the 125-pound division.

The Chinese star has fought some of the biggest names in the strawweight division, including Joanna Jedrzejczyk and Rose Namajunas, but a fight against Shevchenko is something she said she’d accept in a heartbeat.

In a recent appearance on MMA Fighting’s The MMA Hour, Zhang said that regardless of the outcome, her fight against Shevchenko would be a banger.

“Yes. It’s a must, for sure,” Zhang said. “No question. I thought about this a couple of years back. Eventually we will run into each other in the Octagon because the weight divisions are so close. I don’t know for sure if I’ll take the belt away from her, but one thing I can guarantee is it’s going to be a banger if me and the champ get in the Octagon. It will be a great performance, regardless of the outcome.

“She’s such a great martial artist, I’m willing to step into the Octagon with her to learn from her, to share the female fighting spirit in there because she’s one of the best in the world. My opponent adjusts myself. My opponent is still myself. It’s not the person I’m facing, but rather the person I am.”

Who do you think would win a potential fight between Zhang Weili and Valentina Shevchenko?