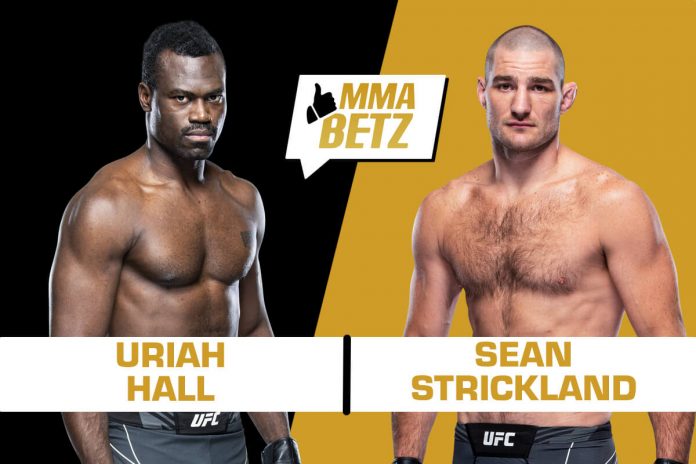 UFC Vegas 33 goes down this weekend at the UFC APEX in Las Vegas. In the main event, long-time middleweight contender Uriah Hall takes on the highly-touted Sean Strickland.

Hall is currently on his best run in the UFC, with four consecutive wins. His most recent outing ended in an unfortunate manner as Chris Weidman broke his leg 17 seconds into their UFC 261 fight.

Strickland is also on a four-fight win streak, with his most recent win coming against Krzysztof Jotko by unanimous decision at UFC Vegas 25.

Hall vs Strickland is an extremely exciting matchup, and it’s unlikely that it will go the distance, as both fighters are known for their knockout power. The two fighters have contrasting styles, with the UFC veteran being a highly polished and composed striker, with excellent counter striking ability, and Strickland being a brawler.

In the grappling department, Strickland has the edge as he averages one takedown per fight and has a decent enough takedown accuracy. Hall has an impressive takedown defence, however, so we should expect an all-out standup fight between the two.

Hall does have quite a lot of losses on his record, but to his credit, his last four losses have come against the top fighters in his division, including former champion Robert Whittaker and former title challenger, Paulo Costa.

Strickland’s volume and output will make him a tricky challenge for Hall, but his fighting style will be vulnerable to Hall’s counter shots, which will result in a finish.

Who do you think wins the top 15 middleweight fight between Uriah Hall and Sean Strickland?