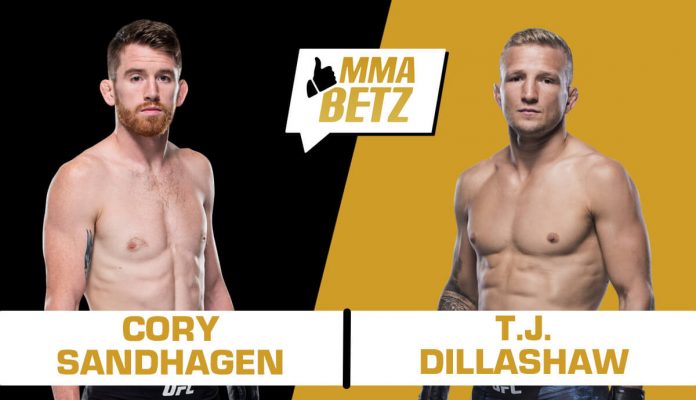 Two months after his 32-second TKO loss to the then UFC flyweight champion Henry Cejudo at UFC Brooklyn in January 2019, it was revealed that Dillashaw tested positive for erythropoietin (EPO) prior to the fight. As a result, he was suspended for two years and stripped of his bantamweight title.

Sandhagen has competed five times since Dillashaw last fought, with four wins and a lone loss to reigning champion Aljamain Sterling. He most recently defeated Frankie Edgar by a highlight reel flying knee knockout in the first minute at UFC Vegas 18.

With Sterling expected to run it back with former champion Petr Yan after a controversial ending to their title fight at UFC 259, both Sandhagen and his Dillashaw have a major opportunity to potentially solidify their place as the number one contender.

Sandhagen vs Dillashaw is a very intriguing matchup as both fighters are not only are very well-rounded and exciting to watch, but also used to train together.

Both fighters are high octane. Sandhagen is a kick heavy fighter, and does an excellent job of using his length and reach to outstrike his foes. Dillashaw is very patient and takes his time early on to find his rhythm and timing, but he’s fun to watch once he gets going. His constant stance switching and movement should work in his favour against ‘The Sandman’, who loves to chop his opponents’ legs up.

In the grappling department, Dillashaw has the edge given his wrestling background. Sandhagen isn’t a slouch on the mat either and has three submission wins to his name, but his takedown defence is below par. Dillashaw also has three submission wins to his name, during his early days, but he’s got a better wrestling game and he will have a lot of success if he chooses to take that route.

Another thing that plays in Dillashaw’s favour is that he’s fought better competition and has several five-round fights on his resume. He’s got the cardio to fight five rounds, but there’s no evidence to say the same for Sandhagen. That being said, Dillashaw could suffer from ring rust after a lengthy lay-off.

Sandhagen has got several tricks in his bag, but Dillashaw will use his experience and target his rival’s weakness to bag a submission win at UFC Vegas 32.

Who do you think wins the bantamweight fight between Cory Sandhagen and TJ Dillashaw at UFC Vegas 32?