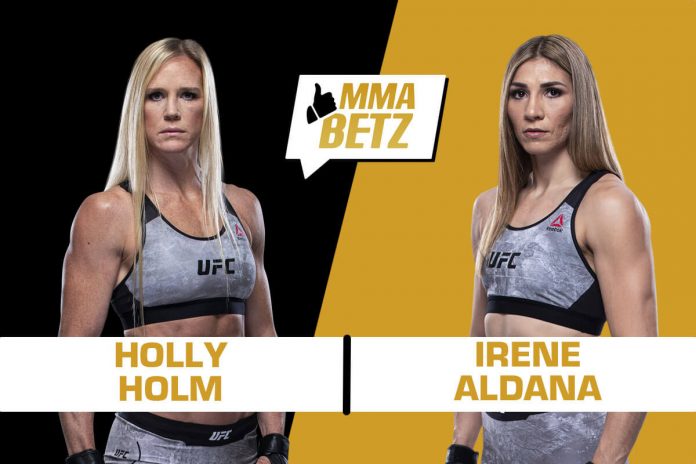 The UFC returns this weekend with UFC Fight Island 4, which will be headlined by Holly Holm vs Irene Aldana. The winner of the top six bantamweight clash will be in a strong position to challenge Amanda Nunes for the title next.

Holm has become one of the most established female fighters in the promotion and has faced some of the biggest names in the game, including six current or former champions. As well as two more opponents who have challenged for a UFC belt.

The 38 year old made her MMA debut in 2011 and was offered a contract with the UFC four years later, still undefeated. After two straight victories, Holm was offered a title match against the then bantamweight queen Ronda Rousey, who she beat in devastating fashion to win the belt.

Since then, the former boxing world champion has taken home just three victories in eight attempts. However, all her losses have come against current or former UFC champions. In her last outing, Holm defeated Raquel Pennington at UFC 246.

Aldana made her professional debut the year after Holm and signed with the UFC ten fights later. Since then, the 32 year old has gone 5-3 inside the Octagon, and is coming off back-to-back wins over Vanessa Melo and Ketlen Vieira.

Although Holm is a multiple world champion in boxing, she’s perhaps become best known for her explosive kicks since making the switch to MMA. However, the former champion is strong and technical enough to take her opponents to the ground.

Aldana has six (T)KO wins to her name and is good at avoiding damage on the feet. In her last fight, she scored a first round knockout over Vieira at UFC 245.

The Mexican often circulates around her opponents and uses leg kicks to slow them down. She also has a solid ground game and has good enough BJJ to avoid submissions. It’s likely that Aldana will look to keep the fight standing, however.

Holly Holm is a little stronger than Irene Aldana in most aspects. William Hill has ‘The Preacher’s Daughter’ as a -125 favourite. While ‘Robles’ is a slight underdog at +105.