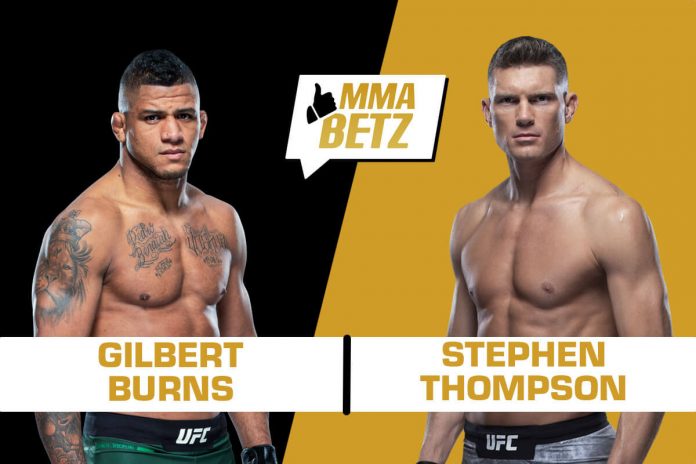 UFC 264 goes down this weekend at the T-Mobile Arena in Las Vegas. In the co-main event, top-five welterweights Gilbert Burns and Stephen Thompson battle it out.

Burns is coming off a TKO loss to UFC welterweight champion Kamaru Usman at UFC 258 in March, while Thompson has won two in a row, against Vicente Luque and Geoff Neal.

Although a win at UFC 264 may not guarantee either of the two men a title shot, since Dana White has said that Colby Covington is the next in line to fight for the title, it will still be a major step towards it.

‘Wonderboy’ is also taller by two inches and has a four-inch reach advantage, so Burns will have a hard time closing the distance. Thompson does a great job of fighting from the outside, and lands a variety of different strikes, keeping his opponents guessing. The Sanford MMA representative’s best shot at winning on the feet is by catching Thompson with something vicious and knocking him out.

The longer the fight stays on the feet, the better it will be for Thompson. Burns will need to push the pace and to find the openings.

While Burns is surely the better fighter on the mat, he won’t be able to do any real damage unless he takes down Thompson, who has an exceptional takedown defence. If he succeeds in landing the takedowns and controlling the former two-time welterweight title challenger, the Rio de Janeiro native’s chances of winning will grow exponentially.

All in all, Thompson will be able to keep the fight standing and put Burns away.

Who do you think wins the welterweight co-main event between Gilbert Burns and Stephen Thompson at UFC 264?