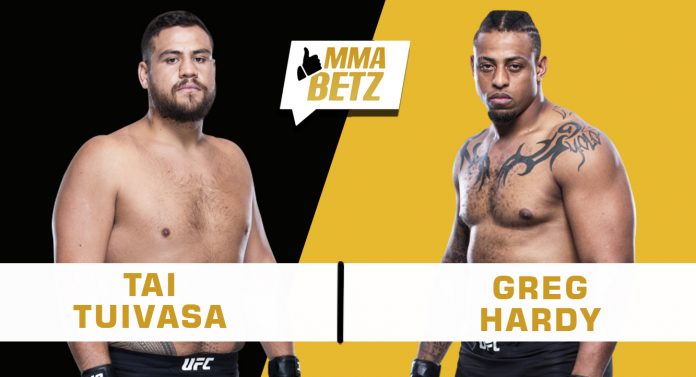 UFC 264 goes down this weekend at the T-Mobile Arena in Las Vegas. Competing on the main card, hard-hitting heavyweights Tai Tuivasa and Greg Hardy go head-to-head.

Coming off back-to-back finishes of Stefan Struve and Harry Hansucker, Tuivasa is looking to improve his winning streak to three against Hardy, who was finished in the second round by Marcin Tybura in his most recent fight at UFC Vegas 17.

Both Tuivasa and Hardy are predominantly strikers, with vicious knockout power in their hands, so don’t be surprised if this one ends quickly.

Tuivasa is the more versatile of the two strikers, and does a great job of damaging his opponent’s legs with heavy kicks. In his most recent fight against Hansucker, the Australian used his leg kicks to set up the stoppage victory, which he earned in less than a minute. Hardy isn’t known for his movement, which will make him vulnerable to Tuivasa’s strikes.

While Tuivasa has a devastating overhand right, which often leads to a flurry of strikes when it lands, Hardy has a slight edge in the boxing department. The American is very aggressive and explosive but does overcommit at times.

Statistically, Tuivasa has the edge when it comes to offensive striking, as he lands 4.4 significant strikes per minute on average, with Hardy landing 3.9. Defensively, Hardy has the slight edge as he absorbs only 2.31 strikes per minute, compared to Tuivasa who absorbs 2.4.

Hardy also has a three-inch advantage in height and a 5.5-inch advantage in reach. ‘Prince of War’ is also very durable, but he does run out of gas pretty quickly, so the longer the fight spans, the better it will be for Tuivasa, who has better endurance.

Both fighters have their advantages and disadvantages going into UFC 264, and it’s a very even fight, but Hardy will get the job done on the fight.

Who do you think wins the heavyweight clash between Tai Tuivasa and Greg Hardy at UFC 264?