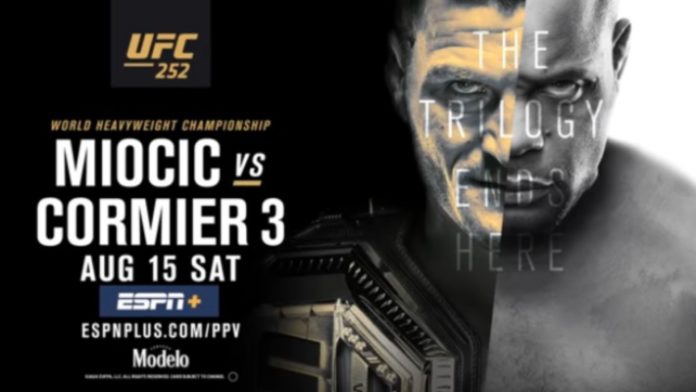 UFC 252 went down on Saturday night at the UFC APEX in Las Vegas, and was headlined by the huge trilogy heavyweight title fight between Stipe Miocic and Daniel Cormier.

Having lost his title to Cormier at UFC 226, Miocic won it back at UFC 241. Tonight, the 37 year old ended the rivalry by beating DC via unanimous decision, after a hard fought 25 minutes.

In the UFC 252 co-main event, Marlon Vera handed Sean O’Malley his first ever loss. It appeared that ‘Suga’ badly injured his ankle in the first round and ‘Chito’ took advantage by taking the fight to the ground and landing heavy ground and pound, before the referee stopped the fight.

Elsewhere on the card, Jairzinho Rozenstruik got back to winning ways by scoring a second round TKO over the former champion, Junior dos Santos.

Conor McGregor And Michael Chandler To Coach TUF 31, Fight At...