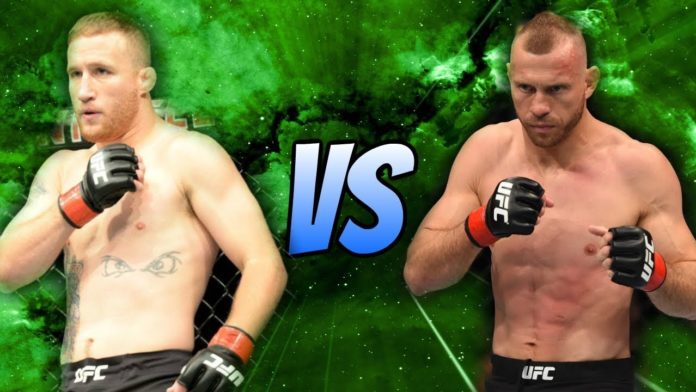 We have a great card to look forward to this weekend, and in the main event we get a real barn burner between two of lightweights best in Donald Cerrone and Justin Gaethje. We’ve gotten real treats in Cerrone’s last two fights; first he fights Tony Ferguson, and now Justin Gaethje. He’s literally fought two of the most violent fighters ever in our sport in a row. The fight with Ferguson lived up to the hype and then some, will this one as well?

Donald Cerrone has always been known for his Muay Thai and his submission game, but his wrestling has really come a long way as well, both offensively and defensively. He went 13-0 in amateur kickboxing and 28-0-1 with 18 knockouts in professional kickboxing, winning four championships between the two before turning to MMA.

‘Cowboy’ didn’t even score his first knockout win in MMA until his sixteenth win, which was his twentieth fight, well past his entire WEC career. Twelve of his first fifteen wins were via submission, if that doesn’t tell you how much talent and instinct Cerrone has, nothing will. Going undefeated in kickboxing and then winning almost all of your fights via submission is insane.

Justin Gaethje is of course the former WSOF Lightweight Champion, and he’s an NCAA Division I All-American and placed in seventh while competing for the NCAA Division I National Championship at 157 lbs. ‘The Highlight’ is one of, if not the most exciting fighter of all time. This guy has been Fight of the Year winner for three different fights by multiple media outlets, Fight of the Month for each of his fights with Luis Palomino, as well as Fight of the Half Year for his first fight with Palomino.

Gaethje is also 7-0 as an amateur, so his entire combat sports record, aside from wrestling, is 27-2, and he has six WSOF world titles to his credit as well. It’s hard to imagine either of these two taking the entirety of what the other can dish out, they’re both so dangerous. This is one of the best fights that could’ve possibly been made, and between the No. 4 ranked UFC lightweight Donald Cerrone and the No. 5 ranked UFC lightweight Justin Gaethje. How do you see this fight playing out? Fight Card posted below: