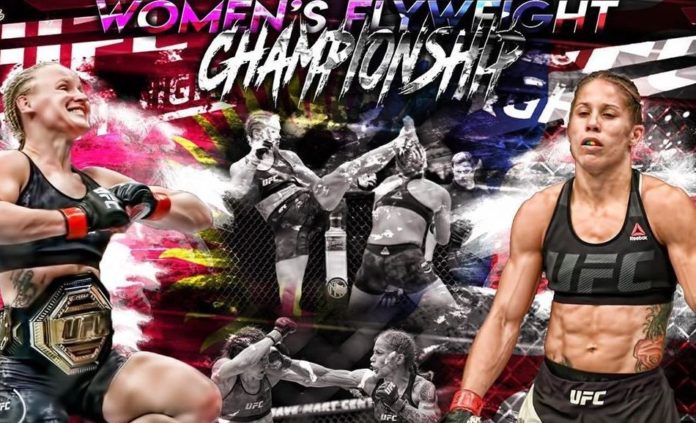 This weekend (Sat. August 10, 2019) we have a great card on ESPN+, with 13 fights from top to bottom. The preliminary card will start at 5pm ET/2pm PT, and the main card will start at 8pm ET/5pm PT. Valentina Shevchenko looks to defend her UFC Women’s Flyweight Championship once again against the first woman to ever make the walk to the UFC cage, Liz Carmouche.

Shevchenko has been nothing short of spectacular in her combat sports career. She went 56-2 in kickboxing, winning numerous titles, 2-0 in boxing, and is thus far 17-3 into her MMA career with two UFC titles to her credit. She’s looking to make that three with a win over the first woman to ever defeat her.

Carmouche is a former challenger of both the UFC and Strikeforce Women’s Bantamweight Championships, and now she’s looking to challenge yet again, but this time at 125 lbs. After going 2-1 thus far at flyweight, with the only loss in a very close split decision. Her strength and wrestling would be what could win her this fight, and the UFC championship.

The striking of Shevchenko is of course worlds above 99% of anyone in MMA, we all know this, but her grappling is at quite a high level too. She has great body lock trips in particular, and is very good once she’s on top, with a well rounded submission game. Carmouche will have to figure out a way to time a takedown perfectly and keep the champion down.

She’ll have to do that for at least three rounds if she wants to defeat the champion, unless she can submit her or TKO her with ground and pound, or perhaps a cut like she did in their first fight. Shevchenko will just have to keep doing what she’s been doing. She already knows how to fight and put on incredible performances, it’s just time for her to rack the wins up.