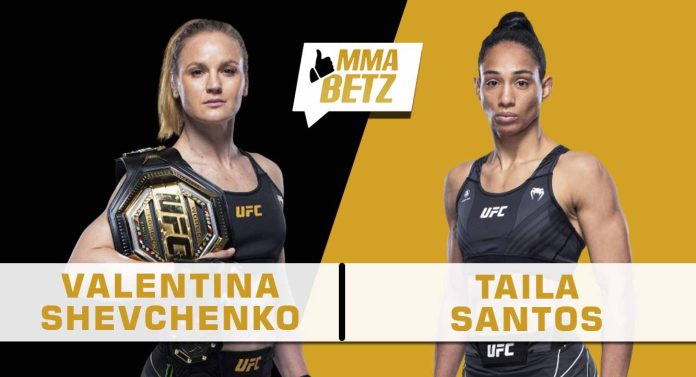 UFC 275 goes down this weekend at the Singapore Indoor Stadium. In the co-main event, flyweight champion Valentina Shevchenko defends her title against Taila Santos.

Shevchenko has defended her title six times since winning it in 2018, with her most recent title defence coming against Lauren Murphy at UFC 266 last year, whereas Santos is on a four fight winning streak, with her most recent win coming against Joanne Wood at UFC Vegas 43. The odds are massively in favour of ‘Bullet’, but the Brazilian is a live underdog and has the tools to pull off the upset.

Shevchenko, who is one of the best strikers in the UFC, is known for her speed, precision and technical kickboxing ability, but she’s also a very solid grappler. Santos is a dynamic striker with a Muay Thai background and has a lot of pop in her shots. She’s also a very good grappler. Santos is strong everywhere the fight goes, but Shevchenko does everything better, which is why she’s a -600 favourite.

Santos is one of the hottest prospects in the flyweight division without a doubt, and she’s a tough fighter, but she lacks experience. Wood was her first top 10 opponent in the promotion and she’s never fought a five round fight. Shevchenko on the other hand has fought the who’s who of the UFC bantamweight and flyweight divisions and putting her off her game will be extremely difficult. Santos has to mix things up and be aggressive to make life difficult for the champion. If she plays the waiting game against the Kyrgyzstani, she will most probably lose.

It’s a tougher fight for the champion than what the odds suggest, but she will get her hand raised nonetheless.

Who do you think will win the flyweight title fight between Valentina Shevchenko and Taila Santos at UFC 275?