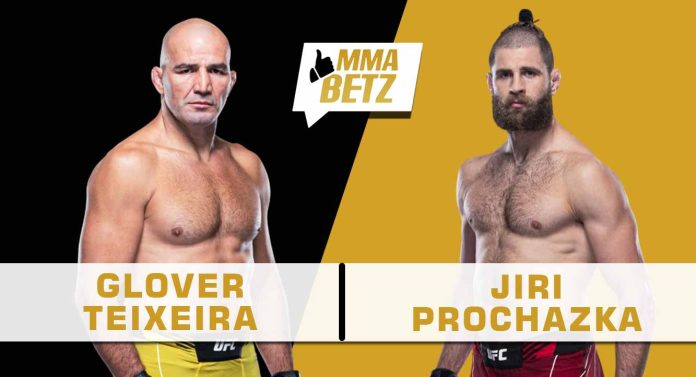 Teixeira is currently on a six fight winning run, most recently beating Jan Blachowicz to win the light heavyweight title at UFC 267. Prochazka is on a 12 fight winning streak and is 2-0 in the UFC. He is coming off brutal knockout victories over Volkan Oezdemir and Dominick Reyes.

Not only is Teixeira a terror on the mat with world class submission skills and brutal ground and pound, but he’s also very lethal on the feet thanks to his vicious knockout power. Prochazka is a ferocious striker. He’s fast, dynamic and very unpredictable. The Czech is able to throw kicks, punches and elbows from different angles and will have the edge as long as the fight stays on the feet. On the mat, Teixeira will have the edge.

Although Prochazka is new to the UFC, he’s an experienced campaigner, who has won the light heavyweight title in two different promotions, most recently in RIZIN FF. Teixeira has an abundance of experience and has fought some of the best fighters in the world. Despite the odds being in Prochazka’s favour, it’s a very even fight and can go either way.

Statistically, Prochazka has better offence as he lands more than seven significant strikes per minute on average, whereas Teixeira lands close to four. Teixeira is better defensively as he absorbs close to four significant strikes per minute on average, whereas Prochazka absorbs close to seven. ‘Denisa’ isn’t very defensive in his approach because he is confident in his ability to get the better of the exchanges and he will approach his fight against Teixeira in the same manner, which will leave him vulnerable to counterattacks and takedowns.

Regardless, Prochazka will try to pressure and bully Teixeira to earn the knockout, and can succeed in doing so, but he could also end up on his back. It’s literally a coin toss at this point, but expect Teixeira to weather the early storm and finish the fight on the mat.

Who do you think will win the UFC light heavyweight title fight between Glover Teixeira and Jiri Prochazka at UFC 275?