Tyron Woodley has lost his last three fights on the spin, but one of them hurt more than the other two. The former champion has explained why his loss to Colby Covington especially hurt.

After being subjected to Covington’s trash talking since when he was the champion, Woodley finally got the chance to fight ‘Chaos’ last September at UFC Vegas 11, but was TKO’d in the fifth round after being dominated throughout the entire fight. The loss followed equally one-sided defeats to Kamaru Usman and Gilbert Burns.

Covington is arguably the most hated man in the UFC, thanks to his brash persona. Speaking to TSN (as transcribed by BJPenn.com), Woodley said that he previously tried to talk the former interim champion out of playing the heel.

“Well, he wasn’t really disrespecting me, he was doing an act. I knew about the act, I even talked to him about it,” Woodley said. “I told him, ‘There’s a different way to do it, you’re going to look stupid and silly. But if that’s what you want to do, go ahead and do it.’ He’s like, ‘Man, I’m just trying to get money and build this up and we can make money at the end.’ I gave him attention one time on a FOX episode and that was it. I told him I wouldn’t say anything else. So for the longest, he was able to go along with it freely. I never said anything about it, I was a champion. I didn’t have to address him.

“It hurt to lose to him just because he was willing to use an act to stir up some negative controversy with some things that are very sensitive. Whether it was with Brazilians or if it was the political debate, whatever he was doing, it was all a game. I think certain things you shouldn’t play with. For someone I used to pay as a training partner who never thought about winning a second against me in any training format in life.

“To lose to a guy like that when I had a chance to go out there and beat him, send a strong message to the division, send a strong message to America that we should start together, and also just to kind of silence him a little bit. Yeah, it kind of hurt for those things more than anything else. But looking back, I never lost an opportunity to reach out to those people to send a positive message. In victory or defeat, it’s still the platform.”

Woodley is set to face Vicente Luque in the UFC 260 co-main event this weekend.

Do you think Tyron Woodley can return to winning ways with a win over Vicente Luque at UFC 260? 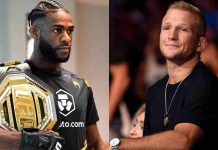 Aljamain Sterling On Dillashaw: He’s Cheated Throughout His Career

Aljamain Sterling On Dillashaw: He’s Cheated Throughout His Career