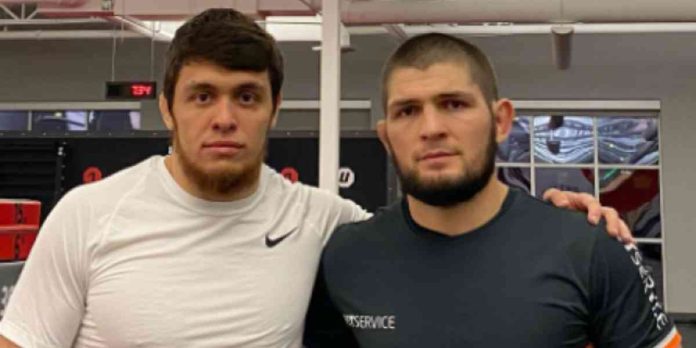 Murad Ramazanov has heaped praise on Khabib Nurmagomedov and Islam Makhachev ahead of the biggest fight of his career against Roberto Soldic at ONE on Prime Video 5.

Ramazanov is currently riding a three fight winning streak in ONE Championship, and hopes to earn a welterweight title shot with a win over debutant Soldic, who is very highly rated. The undefeated Dagestani is one of the most promising prospects in the Singapore-based promotion. Having trained with Khabib and UFC lightweight champion Makhachev earlier this year, the 27-year-old is full of confidence and believes that he’s on another level thanks to his two compatriots.

Murad Ramazanov On Khabib And Islam

In an interview with ONE Championship (as transcribed by SportsKeeda), Ramazanov spoke about his good relationship with Khabib and Islam, and how ‘The Eagle’ has influenced the younger generation of Dagestani fighters.

“We have a good relationship,” Ramazanov said. “During Islam Makhachev’s fight camp in America [in February], we lived nearby and spent all our time together. I’ve had a warm relationship with his family for a long time – his brother Umar and I competed in the same amateur competitions. During the last training camp, I learned a lot from Khabib and Islam, I am on another level as a fighter thanks to them.

“We all looked up to Khabib. He was one of us, a guy from Dagestan who was proud of his heritage, of his fighting style, who was respected. He became a champion. People respected him. We looked at Khabib and believed that it was possible for us, too, one day. His influence on the region is huge.”

Who do you think will win the highly-anticipated fight between Murad Ramazanov and Roberto Soldic at ONE on Prime Video 5?