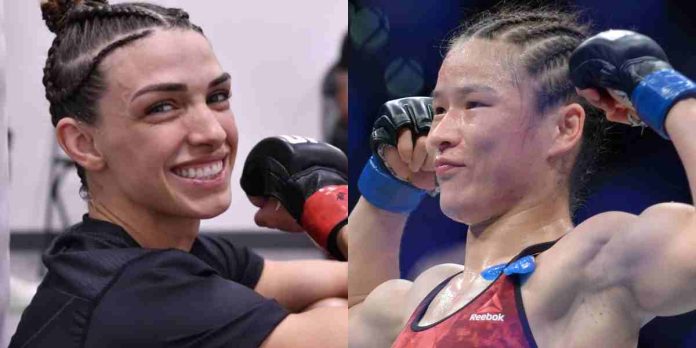 With Carla Esparza expected to take time off while she’s ‘dealing with injuries’, Mackenzie Dern is eyeing an interim strawweight title fight against Zhang Weili

Zhang is coming off a highlight reel spinning back fist knockout of Joanna Jedrzejczyk at UFC 274, and wants to fight Esparza for the title, preferably in October at UFC 281 in Abu Dhabi as she believes a neutral venue would be fair for both athletes. ‘Cookie Monster’ dismissed the Chinese star’s proposal however, saying that it’s way too soon because she is dealing with injuries and needs more time to recover.

Should the UFC set up an interim title in Esparza’s absence, Dern said that she’d be interested in fighting Zhang for it, she told MMA Junkie.

“If they do have an interim title I would like to be in there,” Dern said. “Fight Zhang Weili or whoever it will be. I’m definitely interested in that, I’m ready. I’m talking with Mick [Maynard]. I even sent a message to Dana [White]. I’m like, ‘Hey Dana, I’m ready whoever it is, I’m ready.’ My manager Tim [Simpson] from Paradigm. A lot of names have been thrown out: Yan Xiaonan, Rose [Namajunas], Zhang Weili has been thrown out in the past, so I’m not sure how serious they are about that. But definitely, I would be ready for any of those girls.

“Zhang Weili continues to show she can throw crazy stuff at you and you need to be prepared. I hope to face her eventually, I think that would be a great fight. I don’t think she’s ever fought someone with my jiu-jitsu caliber, but definitely, it would be great. We’ll see what happens.”

Who do you think would win a potential fight between Mackenzie Dern and Zhang Weili?