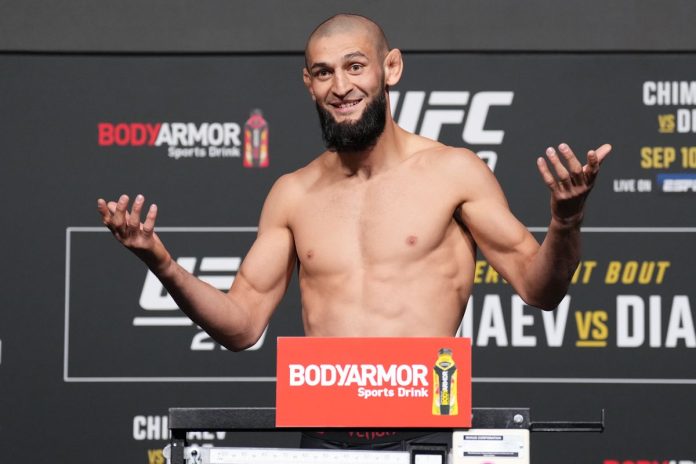 Khamzat Chimaev has reacted to missing weight by 7.5 pounds for his welterweight main event against Nate Diaz at UFC 279.

The UFC 279 fight week has been chaotic, to say the least, and Chimaev has been at the helm of it all. From his heated exchange of words with Paulo Costa to his altercation with Kevin Holland and Nate Diaz backstage which forced the UFC to call off the press conference, the past couple of days have been very animated for the Chechen-Swede. To add insult to injury, ‘Borz’ came in 7.5 pounds over the welterweight limit at Friday’s official weigh-ins, tipping the scales at 178.5 pounds.

Nothing seems to be going Chimaev’s way ahead of his first UFC headliner, which is in jeopardy after he missed weight, but he seems to see the funny side of whatever’s going on behind the scenes. After weighing in way over the 170-pound limit, Chimaev took to Twitter and jokingly blamed Darren Till for it.

Per Ariel Helwani, Chimaev missed weight due to an undisclosed medical issue.

With Chimaev missing weight by a big margin, social media users believe Tony Ferguson, who is scheduled to fight Li Jingliang in the co-main event, should be booked against the Stockton native since both fighters successfully made weight for their 170-pound bouts.

Others believe Khamzat Chimaev ruined what could have been the biggest moment of his career.

What do you make of Khamzat Chimaev’s reaction to missing weight for his UFC 279 headliner against Nate Diaz?