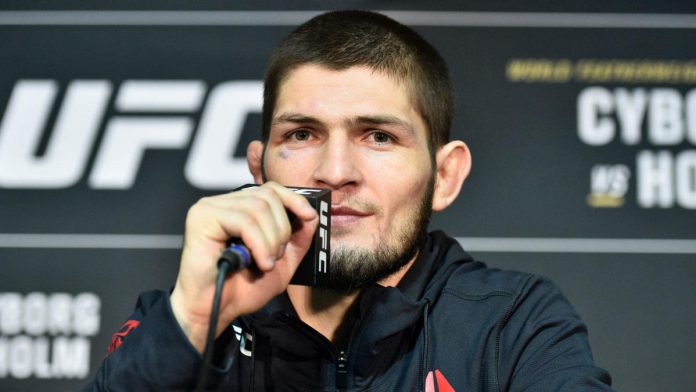 Khabib Nurmagomedov is planning to take a break from mixed martial arts, according to Russian journalist Igor Lazorin.

The former UFC lightweight champion retired from MMA after his third successful title defence against Justin Gaethje at UFC 254 in 2020, a few months after his father’s passing away due to COVID, which was a major reason why he stopped competing altogether. In his post-fight interview, the Dagestani said that he wants to spend more time with his mother.

Despite retiring, Khabib has spent most of his time working with his teammates for their fights, in addition to handling affairs of his promotion, Eagle Fighting Championship, which apparently is not leaving him with enough time to spend with his family. ‘The Eagle’ wants to take some rest by limiting his involvement in MMA, according to Lazorin, who responded to a report that said that Nurmagomedov will be leaving MMA for good. The tweet was deleted an hour later.

In a recent Instagram post, Khabib hinted that he may be taking a break from MMA, thanking his teammate for their support over the years.

“It has certainly been a very busy and successful year. Take care brothers. I hope my decision is only for the best. A big hug to you all. Thank you, you have been a big reason for my success in sports.”

Khabib ended his MMA career undefeated at 29-0 (13-0), with his most notable win coming in his first title defence against Conor McGregor at UFC 229, where he broke the internet after causing a post-fight melee, also involving Dillon Danis. He made his second successful title defence against Dustin Poirier at UFC 242, where he won by second round submission, before ultimately retiring after defeating Gaethje.

In 2022, Khabib Nurmagomedov was inducted into the UFC Hall of Fame’s ‘Modern Wing’.