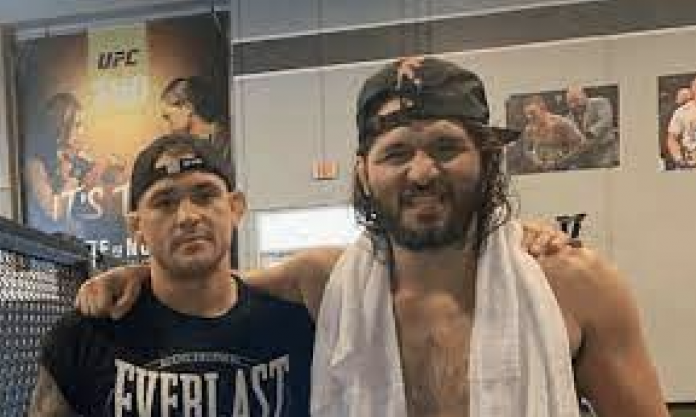 McGregor won their first fight by finishing Poirier in the first round at UFC 178 in 2014, before ‘The Diamond’ exacted his revenge by finishing his arch-rival in the second round of their rematch at UFC 257 in January.

While McGregor says he’s in the shape of his life ahead of UFC 264 and is looking forward to delivering a masterclass, Poirier’s team believe their man is going to get the job done come fight night.

Speaking to Jon Anik on the UFC 264 betting preview show (as transcribed by MMA Junkie), Masvidal said that his American Top Team teammate has been training for the trilogy fight for months, and he’s going to hurt McGregor this weekend.

“He’s in phenomenal shape, man,” Masvidal said. “I’ve been there since the start of the camp. He came in shape. He wasn’t messing around. He knew that the third fight was going to happen at some point. It’s not like he went home and gave himself any slack. He came back full six-packed out, doing five rounds. Usually I see him progress and he gets better every week. He came in on fight shape on week one and he’s looking phenomenal. He’s going to hurt somebody.”

The Crucial First Round

Although Masvidal doesn’t believe McGregor will be able to catch Poirier by surprise, the ‘BMF’ champion says the Louisiana native still needs to be careful in the first round against the Irishman, who has 14 first-round finishes to his name.

“I think Conor gets his timing better than anybody, faster than anybody,” Masvidal said. “If he can’t get his timing right away [Poirier] has to move, chop his legs, grapple and wrestle with him. Take Conor away from that, because he’s one of the best sprinters. Conor coming off the blocks – this guy is a 100-yard sprinter. He’s in your face right away landing big shots. I think Dustin is going to be more than ready for it.

“He faced him twice. He’s got a lot of strategies going into it. I think standup anyways, because he’s dealt with it on two occasions, he knows how quickly he can find his timing. I don’t think he’s going to catch him by surprise, even on the feet. But I think that’s one of Conor’s biggest strengths.”

Do you agree with Jorge Masvidal’s assessment of the Dustin Poirier vs Conor McGregor trilogy?