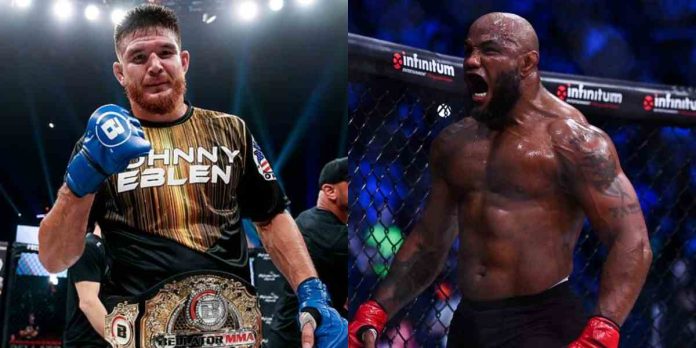 Bellator middleweight champion Johnny Eblen has given his thoughts on a potential showdown with Yoel Romero.

After parting ways with the UFC, Romero has competed thrice in the Bellator light heavyweight division, with a 2-1 record. His most recent win came against a blown-up middleweight in Melvin Manhoef, who he finished in the third round at Bellator 285. ‘Soldier of God’ now wants to move down to middleweight and challenge newly-crowned champ, Eblen, who captured the title by dominating MMA legend Gegard Mousasi at Bellator 282.

Speaking to MMA Junkie, Eblen said he doubts Romero is “all natural” but believes that he would drown him if the two lock horns.

“I feel like he needs another solid win, especially at 185, so we can make sure he can make weight because he’s always had weight trouble,” Eblen said. “I don’t want to deal with someone who can’t make weight. I don’t know if that dude’s all natural. I really don’t care. I’ll beat his ass if he’s on steroids or not. I don’t care. Not to say that he’s on steroids, but I don’t know. Who knows. All these motherf***ers are on steroids, [like] Nate Diaz [said].

“He’s not [the best Middleweight]. He’s good. He’s explosive, especially at 45 [years old]. He’s still dangerous in some scenarios, but I think I would put on a pressure he couldn’t sustain and I think I would drown him out there. I think he’s a good name to beat. He would be a good name to add to the resume.”

Ideally, Eblen said that Russia’s Anatoly Tokov – who boasts a 31-2 MMA record with six consecutive wins in Bellator – should be the next in line for a title shot, but Romero is on his hit list as well if he can cut down to the 185-pound limit.

“I was kind of joking when I said I would retire another person, because I didn’t retire Gegard,” Eblen said. “Some talks, but I think the most sensible title defense would be Tokov, but obviously Yoel can be in the picture too. We just got to make sure he can make weight. Dude hasn’t made 185-pounds since 2020.”

Who do you think would win a potential middleweight title fight between Johnny Eblen and Yoel Romero?