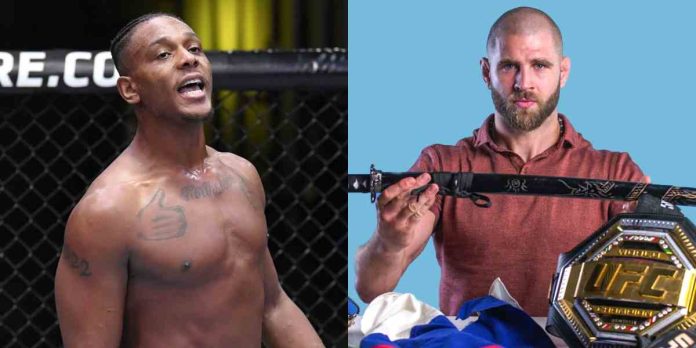 Jamahal Hill is full of praise for ‘physical freak’ Jiri Prochazka, but believes that he is better than the UFC light heavyweight champion in every way.

Hill is currently riding a three fight winning streak with his most recent win coming against Thiago Santos by fourth round stoppage at UFC Vegas 59. Although he won’t mind fighting for the number one contender’s spot, ‘Sweet Dreams’ believes he deserves to jump the line to fight for the 205-pound title and that he matches up well with the reigning champ. In fact, he considers himself better.

Speaking to Matt Serra on the latest episode of UFC Unfiltered (as transcribed by Sportskeeda), Hill heaped praise on Prochazka before explaining why he thinks he’s better.

“From the first time I saw him, I knew he was a fun fight,” Hill said. “He’s a flow fighter, that’s what I am. He likes to cause chaos and then use his ability to flow with it… Jiri is like that though, he flows, he causes chaos and then he flows through chaos and he lands big shots. He’s a physical freak, you can see his physical stature and things like that. Yeah, I just think I do those things better from what I see. My flow is stronger, my technique is sharper. I’m more dynamic, I have more tools.”

Prochazka won the title after scoring a fifth round submission win over Glover Teixeira in a back-and-forth war at UFC 275. While not officially announced by the UFC, the pair will likely run it back in the UFC 282 main event in December.

Who do you think Jamahil Hill should fight next?