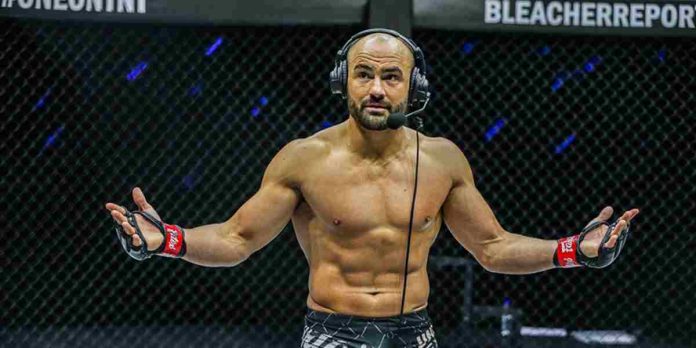 Former UFC and Bellator titleholder Eddie Alvarez has explained why he parted ways with ONE Championship.

Alvarez signed with ONE after a successful career in the UFC, where he won the 155-pound title and fought the biggest names, including Conor McGregor, Dustin Poirier, and Justin Gaethje. His four-year stint in Asia’s biggest MMA promotion was anything but ideal however.

Eddie Alvarez On Departure From ONE

‘The Underground King’ suffered a shocking loss to Timofey Nastyukhin in his debut. In his second outing, he was nearly stopped by Eduard Folayang before coming from behind to earn a submission win. The MMA veteran’s third fight against Iuri Lapicus ended in a disqualification due to illegal strikes, although the fight was later ruled a no-contest after he appealed the decision. His fourth and final fight ended in a loss to Ok Rae Yoon in April last year and he hasn’t competed since.

Speaking on MMA Fighting’s The MMA Hour, the 38-year-old said he wants to finish his career competing in the United States.

“The contract was coming to an end, and I spoke with my agent and I told him, ‘I would like my career to finish up in the United States,” Alvarez said. “And when we originally sat down with ONE, the idea was that [they] would progressively move to the US. The plan was to have fights in Asia, and then my idea in my head was I would start in Asia, and towards the end of my contract, we would move closer to the US and eventually get a fight there.

“Unfortunately, the pandemic threw a wrench into all of those plans and slowed the progression of that up by a lot. I’m going to more than likely be signing my last contract, and I just want to be fighting here in the United States. I really want and need to fight in the United States to finish my career here.”

Would you like to see Eddie Alvarez return to the UFC?