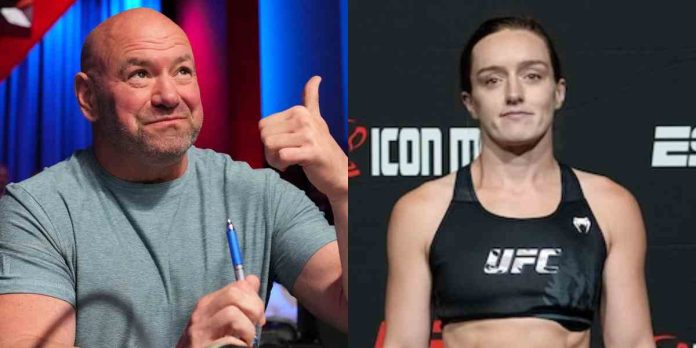 Dana White has said that he was left with no choice but to part ways with Aspen Ladd despite the fact that he didn’t want it to happen.

Ladd was released by the UFC earlier this week after missing the bantamweight limit by two pounds for her scheduled fight against Sara McMann at UFC Vegas 60. The bout was scrapped as a result. During her five-year stay in the UFC, the 27-year-old failed to make weight thrice, leading to two fight cancellations. The miss marked the final straw for the UFC bigwigs, who the California native failed to impress during the past three years with three losses in her last four fights, including back-to-back defeats at the hands of Norma Dumont and Raquel Pennington.

Speaking to the media during Tuesday night’s Dana White Contender Series (as transcribed by MMA Fighting), Dana said that he didn’t want to let go of a talented fighter like Ladd, but it was the right thing to do.

“We tried to work with her,” Dana said. “She’s a great kid. She’s a really nice person. It’s never fun when you have someone who’s actually talented. She’s a talented fighter, but part of the job is making weight. She’s not made weight so many times. It had to happen. Not something you want to do, but something that had to be done.”

Ladd is yet to comment on her release, which was first reported by UFC Roster Watch. She parts ways with the UFC with a 4-3 record, after starting off extremely well with three consecutive wins to briefly garner title talk.

Do you think Dana White and the UFC made the right call by parting ways with Aspen Ladd?