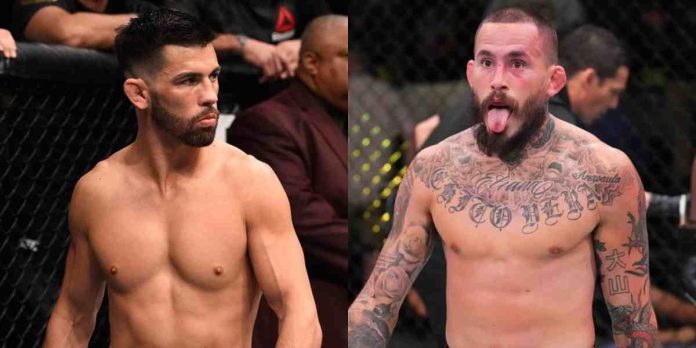 Vera wouldn’t mind a fight against Cruz either, but he believes that the latter doesn’t want to fight him.

During a recent appearance on MMA Fighting’s The MMA Hour (as transcribed by BJPenn.com) however, Cruz rejected Vera’s accusations, saying that he’s totally down to fight him.

“I’m open to fighting him, yeah, but what I’m hearing now is – what’s funny is he’s talked all this trash about me from what I’m hearing, but I don’t really pay attention to calling me out,” Cruz said. “I’m sorry that people calling me doesn’t affect me. Like I said, I focus on dates. I don’t say no to fights – I don’t know where he’s getting this idea that I do. I say no to dates. Opponents don’t really matter, because you’re going to have to fight everybody to get to [a] championship anyways. So if he thinks I said no, I said no to dates. OK. That’s between him and his manager, whatever his manager is telling him is what he’s going to believe. I’m not opposed to that.

“What’s funny is I did hear him saying he wants somebody in the top-five or top-four, so why would he ask for those [opponents with those rankings] if it didn’t matter. If moving up the ladder didn’t matter, then why would you ask for somebody above you, not underneath you in the division, like he’s done. Well, it’s the same reason I have, the same reason the rest of us all have: We’re all fighting in the same bracket to be champion. So yeah, I’m not opposed to it. He’s ranked above me now, too. So sure. Let’s get the date.”

Who do you think would win a potential fight between Dominick Cruz and Marlon Vera?