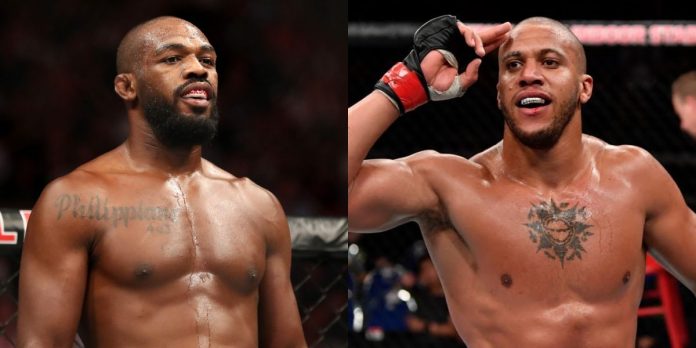 Gane finished Derrick Lewis in the third round to win the interim title at UFC 265, and will likely fight Francis Ngannou to unify the titles next. While ‘The Predator’ is arguably the scariest fighter on the planet, Cormier believes he’s in for a real test against ‘Bon Gamin’.

Jon Jones Is The Guy

Speaking on his DC and RC show on ESPN (as transcribed by MMA Junkie), Cormier explained why he thinks Jones would cause the most problems to Gane.

“This is crazy coming from me – Jon Jones,” Cormier said. “Jon Jones is the guy that will present the most problems to Ciryl Gane. Why? Because Jones has fought at 205 [pounds], Jon Jones has the skill of a little guy, Jon Jones has seen athletes before.

“Jon Jones beat me twice. I’m an athlete. He’s seen the speed, he’s seen the foot movement and the angles, he’s had to deal with guys like that before. Now can he handle that at a weight class above? I don’t know. But I truly believe that Jones is one of the guys that truly can give Ciryl Gane problems, but I don’t know who beats him. I think Francis has his hands full.”

Jones hasn’t fought since successfully defending his light heavyweight title against Dominick Reyes at UFC 247 in February last year. He vacated his belt in August last year to move up to heavyweight, but his return to the Octagon has been stalled due to failed negotiations with the promotion. Earlier this week, Dana White said that ‘Bones’ won’t be fighting until 2022.

Dana also said that Stipe Miocic has accepted a fight with Jones, but the former 205lbs champion’s coach Mike Winkeljohn said that the matchup doesn’t excite them.

Do you agree with Daniel Cormier that Jon Jones poses the biggest challenge to Ciryl Gane?