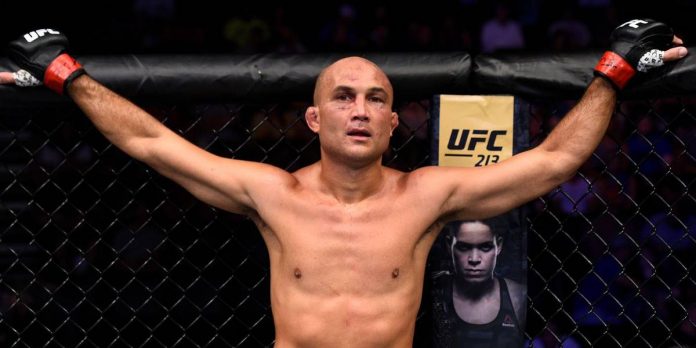 Former UFC two-division champion BJ Penn has revealed that he was nearly killed at a wave pool after being sucked into the engine room last year.

‘At That Moment, I Got Scared’

In an Instagram post, the Hawaiian shared harrowing details of his near-death experience, saying that he got too close to the wall where the wave comes from and moments later, he ended up in a ‘dark cement room’, where he fought for his life for about an hour before he was rescued.

“Last year when I got sucked into a wave pool engine room and thought I was going to die… I kept thinking ‘don’t die for your kids’ I was surfing for about an hour and the line started getting longer to catch the wave,” Penn said. “I was sitting next to the owner of the wave pool by the ‘wall’ where the waves come from. The first wave it shoots out is a dud to get everyone ready for the next wave. The dud wave came back and because I was so close to the wall the wave swallowed me and pushed me and my surfboard underneath a huge cement wall. I remember feeling like I was getting sucked in a pipe and at that moment I got scared.

”It ended up pushing me into a big dark cement room that filled up with water to push the next wave for the wave pool. It felt like I was in the movie SAW or Final Destination. The room would fill up with water to the top and I would hold my breath and then it would push the water out to make the wave and it was really rough inside there. Everything I bumped up against in the room that hurt me got infected. I got a bad sinus infection and a couple of facial fractures from getting knocked around the cement walls and from the fractures the dirty water got in my face and infected my whole sinus. I was on antibiotics for three weeks for my face. While I was in the wave pool engine room I knew that one of my friends from the big island is a legendary surfer and I knew he would come in there to rescue me so I stayed calm.”

Fighting For His Life

Penn believes any other person could very well have panicked and given up in such a terrifying situation, but his warrior spirit, coupled with his desire to survive for his kids, saw him through.

“A lot of other people might have panicked and maybe gave up but I just stayed strong for my kids,” Penn said. “Anyway to make a long story short I survived that mother f***er!! The names of the people and water park have been left out. I’m not the kind guy who shows up to your house to play and gets hurt and tries to sue you so all love to everyone who helped me get there and helped me survive. Maybe I was the first guy in history to get sucked into a wave pool engine room while it is in operation but no matter what happens in life and no matter how scary it is if I can offer you any advice I would just say to ‘stay calm’. If I didn’t fight tough c***s my whole life I might have panicked, but it was just another day in the office.”

BJ Penn, who is currently on a seven-fight losing streak, hasn’t fought since losing to Clay Guida by unanimous decision at UFC 237.