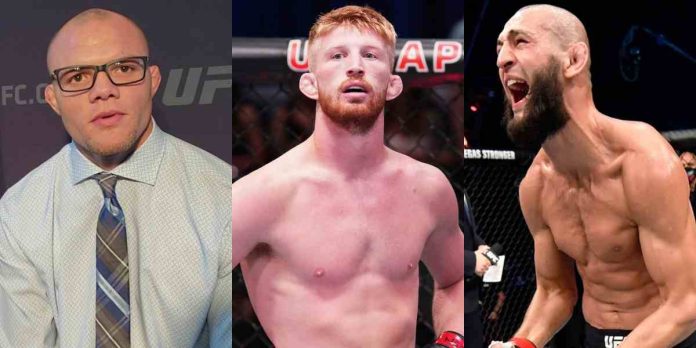 Nickal won himself a UFC contract with a second consecutive submission win on Dana White’s Contender Series and is now booked to face Jamie Pickett at UFC 282 in December. ‘The Allen Assassin’ wanted to face Chimaev in a clash for the ages, but Dana White told him to pump the brakes and gradually make his way to the top.

If Nickal and Chimaev keep winning, they will eventually cross paths. For now, the Chechen-Swede has far more experience, and a better all-around skillset. In an MMA fight, many including Daniel Cormier, favour ‘Borz’ but in an all-out wrestling contest, Smith thinks the American would make it look easy.

During a recent appearance on Michael Bisping’s ‘Believe You Me’ podcast, Smith said that a potential wrestling match between Nickal and Chimaev wouldn’t be competitive.

“He [Nickal] will ragdoll Khamzat in a wrestling match,” Smith said. “It wouldn’t even be competitive, he’s that f***ing good. There’s not a Dagestani/Russian wrestler in the UFC that’s gonna beat Bo Nickal. I don’t even care what weight class you say it is. The only reason he didn’t compete in the Olympics was that the guy ahead of him (David Taylor) was better than him. Bo is the second best wrestler in the world across any weight class. I think he is the best active wrestler in the UFC right now. How he is going to translate that into high-level mixed martial arts, I don’t know.”

Do you agree with Anthony Smith?