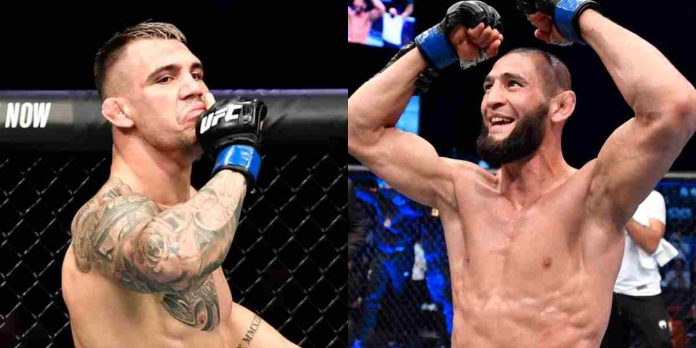 Aleksandar Rakic believes Khamzat Chimaev is ready for a step up in competition after four consecutive wins in the UFC.

Chimaev returned to the Octagon after a year-long layoff to face Li Jingliang at UFC 267, where he won by first-round submission. Immediately after the start of the first round, ‘Borz’ sprinted towards his opponent, ducked under his punch, picked him up, and walked him over to the fence, where he briefly yelled at Dana White before slamming him onto the mat.

The Chechen-Swede proceeded to smash him with heavy shots for the next three minutes before putting him to sleep with a rear naked choke halfway through the third minute. Chimaev is now eyeing a fight with a top-five welterweight contender, which Rakic believes he definitely deserves.

Speaking to James Lynch, Rakic recalled training with Chimaev in Vienna and said that the 2020 breakout star deserves to fight a top contender next.

“I met Khamzat when he came to Vienna for a couple of days because he has some friends here,” Rakic said. “So he came to the gym where I’ve been training and we had one training session. He seems like a very nice guy. He is doing a very good job in the UFC and he is pretty tall for his weight class. He’s almost [as tall as] me and I’m a pretty tall guy for the light heavyweight division. There’s a lot of hype around him, and I think he’s ready for the top 10 and the top five in the UFC.”

Who do you think Khamzat Chimaev should fight next?