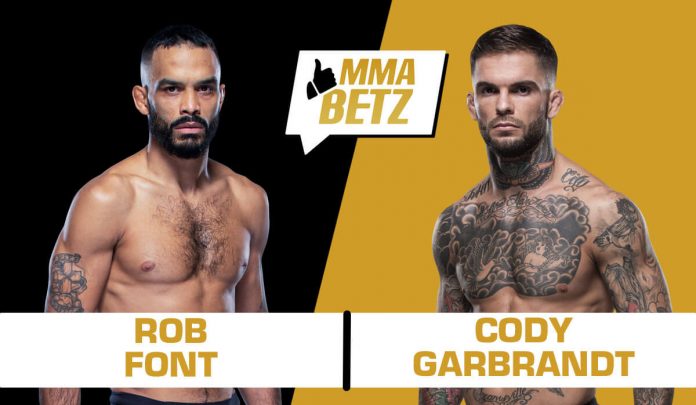 UFC Vegas 27 goes down this weekend at the APEX Center in Las Vegas. In the main event, Rob Font and Cody Garbrandt lock horns in a key bantamweight fight.

Font is currently on a three-fight win streak, with his most recent victory coming against Marlon Moraes by first round TKO at UFC Vegas 17. While Garbrandt snapped a three-fight losing skid in his last outing against Raphael Assuncao, when he earned a second-round TKO win at UFC 250.

The Massachusetts native sits at number three in the bantamweight rankings, while ‘No Love’ sits one place below him in fourth spot.

Font vs Garbrandt is the perfect stylistic matchup. Font is a high-level kickboxer with high output, power, and precision. While Garbrandt is one of the best boxers in the division, who uses his speed and power to knock his opponents out. The Team Alpha Male representative also has great kicks.

Garbrandt has shown holes in his game in his losses to TJ Dillashaw and Pedro Munoz, but he did make visible adjustments against Assuncao. That said, Font is a far better striker than the Brazilian, with more variety and incredible six-inch reach advantage.

Font is also able to fight on the inside and outside, which could give him a major advantage over Garbrandt, who has shown that he’s very hittable in his recent losses. He did show a much composed version of himself against Assuncao, and his head movement was also on point. It will be interesting to see which version of the Ohio native shows up at UFC Vegas 27.

We shouldn’t expect a lot of grappling as both predominantly prefer to keep the fight standing. However, Font may try to land a few takedowns to steal the rounds.

Garbrandt will look to fight another composed fight, but Font will try to use his reach advantage and volume to pressure and force him into making mistakes. All in all, it will be an exciting back-and-forth kickboxing battle, with Font getting the better of the exchanges and earning a stoppage win at UFC Vegas 27.

Who do you think wins the UFC Vegas 27 main event between Rob Font and Cody Garbrandt?