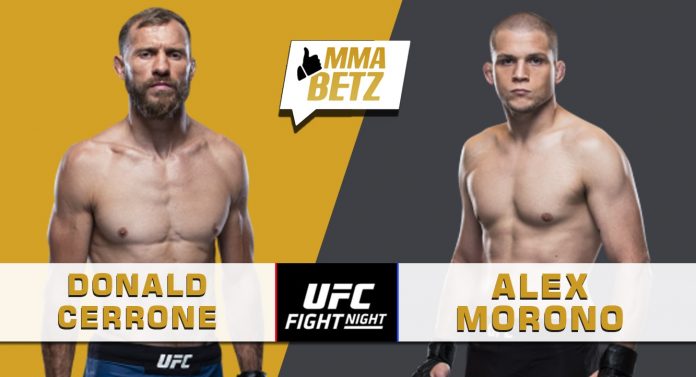 UFC Vegas 26 goes down this weekend at the UFC APEX in Las Vegas. In the co-main event, ‘Cowboy’ Cerrone takes on Alex Morono in a welterweight contest.

‘Cowboy’ was originally scheduled to fight Diego Sanchez at the event, but the fight was scrapped as ‘The Nightmare’ was released from the UFC after failing to certify that he was 100 percent healthy and ready to compete.

Morono is stepping in on less than a week’s notice to face ‘Cowboy’, which means he could be below his best at UFC Vegas 26. But that doesn’t mean he can’t put up a fight and actually win.

Cerrone has lost four of his last five fights, with the remaining one being a draw against Niko Price at UFC Vegas 11, which was later ruled a no contest. But to ‘Cowboy’s’ credit, his losses came against the absolute best of the lightweight division, Tony Ferguson, Justin Gaethje, and Conor McGregor at welterweight.

From a technical standpoint, however, ‘Cowboy’ has the edge. He mixes his strikes up really well, with fluid combinations, and he rarely tends to slow down. Morono normally tends to slow down in fights, and this fight won’t be any different, especially when he hasn’t had a full training camp.

‘Cowboy’ has the edge in the grappling department, although both fighters are BJJ black belts. The Texas native is not a hard man to take down and control on the ground, and his opponent can surely exploit his weaknesses on the mat.

All in all, ‘Cowboy’ will mix things up to churn out a decision win at UFC Vegas 26.

Who do you think wins the welterweight co-main event between ‘Cowboy’ Cerrone and Alex Morono at UFC Vegas 26?