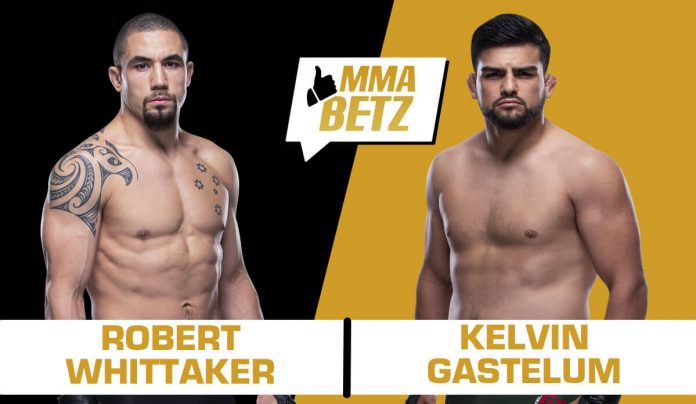 UFC Vegas 24 goes down this weekend at the UFC APEX in Las Vegas. In the main event, Robert Whittaker takes on Kelvin Gastelum in a potential middleweight title eliminator.

Whittaker was originally scheduled to fight Paulo Costa, who had to withdraw due to illness, making way for Gastelum to step in on one month’s notice.

‘The Reaper’ is riding a two-fight win streak, with impressive victories over Darren Till and Jared Cannonier. While Gastelum recently ended a three-fight losing skid against Ian Heinisch at UFC 258.

Although Gastelum is 1-3 in his last four fights, he’s still one of the top fighters in the division. His battles with Israel Adesanya and Till were very close, while his submission loss to Jack Hermansson was a combination of poor decision-making and bad luck. He’ll certainly give Whittaker, who’s a -265 favourite, a run for his money.

Gastelum was scheduled to face Whittaker once before, for the middleweight title at UFC 234, but the fight was cancelled after the former champion pulled out hours before the fight as he needed emergency surgery on an internal hernia of the intestine. They have spent months preparing for each other before, so they know what to expect come UFC Vegas 24.

Whittaker and Gastelum are as tough as the middleweights come. They are both powerful and durable. However, ‘Bobby Knuckles’ has superior footwork compared to his counterpart, and will use his two-inch reach advantage to stay ahead on the judges’ scorecards.

We shouldn’t expect a lot of grappling action in this fight, because both fighters love to keep the fight standing. Although Gastelum might try to mix things up, it’ll be a laborious task for him to take the fight to the mat. Even Yoel Romero couldn’t take Whittaker.

Gastelum will certainly lunge forward with mean intentions on the night, but unless he catches Whittaker with a haymaker, he’s going to have a hard time keeping up with his opponent’s pressure, pace and movement.

Who do you think wins the UFC Vegas 24 main event between Robert Whittaker and Kelvin Gastelum?