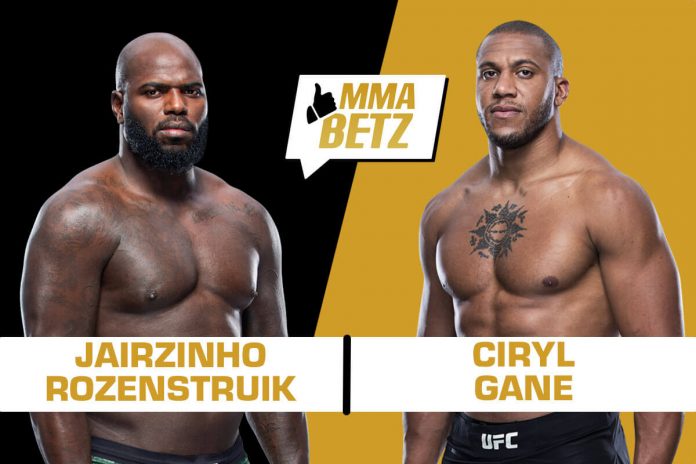 UFC Vegas 20 goes down this weekend at the UFC APEX in Las Vegas. In the main event, heavyweight powerhouses Jairzinho Rozenstruik and Ciryl Gane go head-to-head to lay claim to a title shot.

Things are getting increasingly interesting in the UFC heavyweight division. Last week at UFC Vegas 19, Derrick Lewis caused a huge upset by knocking out a sizeable favourite in Curtis Blaydes in the second round with a vicious uppercut. ‘The Black Beast’ has now replaced his foe as the number two ranked fighter in the division.

Next month at UFC 260, champion Stipe Miocic puts his title on the line in a rematch against Francis Ngannou, and as per Dana White, the winner will defend his title against divisional newcomer Jon Jones. This is a massive opportunity for both Rozenstruik and Gane to make a statement.

Ciryl Gane is arguably the most promising heavyweight prospect in the UFC at the moment, and is extremely well-rounded. He has punches, kicks, knees, grappling and he is devastating in the clinch. But what makes him truly remarkable is the way in which he moves inside the Octagon for a big guy.

As Dana pointed out in the UFC 256 post-event press conference, Gane truly “moves like a middleweight”, and manages distance very well, which is one of the reasons why he has an exceptional striking defence of 82 percent.

Rozenstruik is a powerhouse. He merely needs one clean shot to win a fight, and usually finishes the job early, as seven out of his ten wins have come in the first round by the way of KO or TKO. However, Gane only absorbs a minuscule amount of one-and-a-half strikes per minute, compared to three strikes absorbed per minute by ‘Bigi Boy’. Given the fact that both fighters land almost the same amount of strikes, a little over three-and-a-half strikes per minute, it will come down to who defends better. ‘Bon Gamin’ has a slight edge on the feet going into the fight.

On the mat, however, the tide shifts in the Frenchman’s favour by a decent margin. Rozenstruik doesn’t like fighting on the mat, while his opponent is a skilled grappler, with three of his seven wins coming by the way of submission. While the Surinamese has a decent takedown defence of 75 percent, it is going to be hard for him to stop a strong guy like Gane from taking him down.

Gane is certainly more versatile of the two fighters and has more ways of winning than Rozenstruik. He should win by stoppage.

What are your predictions for the heavyweight clash between Jairzinho Rozenstruik and Ciryl Gane in the UFC Vegas 20 main event?