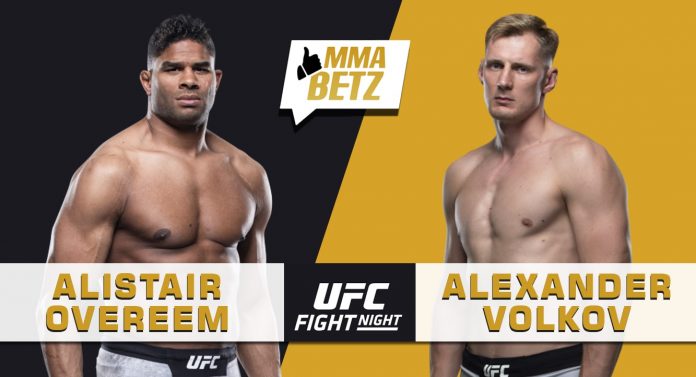 The UFC returns this weekend with UFC Vegas 18, at the APEX Center in Las Vegas. In the main event, top six heavyweights Alistair Overeem and Alexander Volkov go head-on in an attempt to take a step closer to a shot at the heavyweight title.

Overeem has won four of his last five fights, with his only loss coming against Jairzinho Rozenstruik, who knocked him out with four seconds left on the clock at UFC Washington DC, having been dominated for the entire five round main event.

With time ticking on his career, the Dutchman is looking to have one final run at UFC gold, and aims to retire with the belt wrapped around his waist. His final attempt at winning the heavyweight championship starts this weekend against Volkov, who isn’t a stepping stone by any means.

Volkov has won seven of his nine fights inside the Octagon, most recently a TKO win against Walt Harris at UFC 254. However, he is still the betting favourite.

Both Overeem and Volkov are veterans of the sport, with over 80 MMA fights between them. Both have held belts in other promotions, and are looking to add the UFC heavyweight crown to their illustrious trophy cabinets. ‘The Reem’ has had a title shot before, against Stipe Miocic at UFC 203, but was knocked out in the first round.

Overeem and Volkov are predominantly strikers, with the former being a bit more explosive in his approach. In contrast, his opponent isn’t a scary power puncher, but he’s an extremely busy striker, who makes it hard to land clean shots, and out position him.

Volkov strikes at a good frequency, landing almost seven strikes per minute. Compared to Overeem’s three and a half strikes landed per minute. The 32 year old also absorbs significantly less than his opponent, which could be make the difference.

‘Drago’ also has excellent endurance, and can fight all five rounds. If he doesn’t finish the Moscow native early, we could see Overeem slow down as the fight progresses. The key for Volkov will be his kicks, as he is going to have a 2.5 inch reach advantage. If he uses his kicks well, not only is he going to keep his opponent at distance, but also hurt the former Strikeforce champion in the process, in the same way that he did to Harris.

One interesting thing to note here is that Overeem has been relying on his wrestling quite a lot lately, so he might want to mix it up against Volkov, but I don’t think he has the grappling skills to control his opponent on the mat.

All in all, it’s a close fight, but Volkov has a slight edge.

Who do you think wins the UFC Vegas 18 main event between Alistair Overeem and Alexander Volkov?