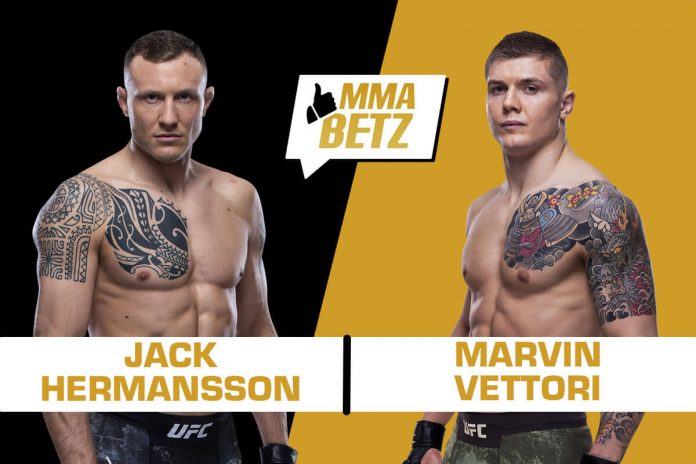 UFC Vegas 16 goes down this weekend at UFC APEX in Las Vegas. In the main event, middleweights Jack Hermansson and Marvin Vettori battle to take a step closer to the title.

Hermansson was initially slated to fight Darren Till, who unfortunately had to pull out. Kevin Holland was brought in as the replacement, but was removed after he tested positive for the coronavirus. As a result, Vettori, who was scheduled to fight ‘Jacare’ Souza a week later at UFC 256, was pulled out from the event and matched up against ‘The Joker’.

To the surprise of many, the Italian is starting as the betting favourite against his Swedish opponent. Vettori is 4-1-1 in his last six fights, with his only loss coming against the reigning, undefeated middleweight champion Israel Adesanya, via split-decision. Hermansson is 5-1 and is coming off a first round submission win over Kelvin Gastelum at UFC Fight Island 2.

With momentum on both sides, the deciding factor will depend on which of the two executes his game plan better.

Hermansson vs Vettori: Analysis And Prediction

Vettori is a well-rounded fighter who uses a combination of high-pressure striking with good grappling. Taking into consideration the fact that he had been preparing for grappler like ‘Jacare’, who is similar in style to Hermansson, ‘The Italian Dream’ will not have to make any major changes to his game plan.

A slight striking advantage goes to Vettori, but with the fear of being taken down, his high-pressure striking could make him more vulnerable to takedowns. Hermansson possesses incredible knock out power, something his opponent hasn’t really shown inside the Octagon.

Vettori is a smart ground fighter, with nine submission wins to his name. He also has never been finished. Hermansson has won three of his last four wins via submission, and he will be looking to choose the same path again come fight night.

It’ll be interesting to see whether Hermansson can submit his opponent because if he does not, I do not see a lot of paths that will lead him to victory. Vettori has more ways of winning. His pressure style, distance control, and volume are why he takes the lead in this fight and will score well on the judges’ scorecard as the fight progresses.

All in all, Hermansson vs Vettori is an extremely exciting fight, more than people are giving it credit for.

What’s your prediction for Jack Hermansson vs Marvin Vettori at UFC Vegas 16?