UFC lightweight contender Michael Chandler is looking for a fight, and Dustin Poirier thinks one of his former opponents will be the perfect match.

Former Bellator champion Chandler signed with the UFC in September, and entered the mix right away when he served as the backup for the lightweight title fight between the reigning champion Khabib Nurmagomedov and interim champion Justin Gaethje at UFC 254. The 34-year-old was later offered a fight with Tony Ferguson for UFC 256 in December, but he supposedly turned it down, saying he won’t be ready to fight before January.

With Ferguson booked against Charles Oliveira at UFC 256 now, and ‘The Diamond’ set to fight former UFC two-division champion Conor McGregor at UFC 257, Chandler has two options in the top five – number one ranked Justin Gaethje and number five ranked Dan Hooker. Out of the two, Gaethje will be a great ‘measuring stick’ for the former three-time Bellator champion, Poirier told MMA Junkie.

“I would think it would probably be him and Gaethje before him and Hooker,” Poirier said. “If you’re going to toss him into the top of the division and giving him this push, give him the former interim champ who just came off a title fight. That’s a great measuring stick to see where he’s at.”

Ferguson versus Oliveira is a fight that guarantees fireworks. What makes this fight interesting is the similarity in fighting styles of the two competitors, and that has got Poirier excited too, who believes the two are going to put on a great show.

“That’s a fun fight,” Poirier stated. “Any fight Tony’s involved in – even Charles – he’s such a fun guy to watch. A finisher, a veteran who has been around a lot time. Those two guys are going to do a great fight.”

There is so much going on in UFC’s lightweight division right now, with four of the top contenders booked against one another in the next two months, and the rest of the pack looking for dance partners. There is also a lot of confusion surrounding the retirement of the reigning champion Khabib, who maintains that he has retired. Although UFC president Dana White is sure he will return for one fight. The two are expected to meet in the coming days.

Who do you think will be the UFC lightweight champion this time next year, Dustin Poirier, Khabib Nurmagomedov, Conor McGregor, Justin Gaethje, Tony Ferguson, Michael Chandler, or someone else? 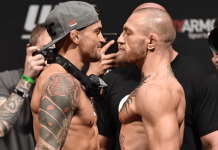 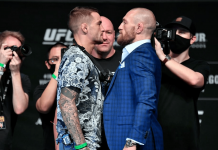