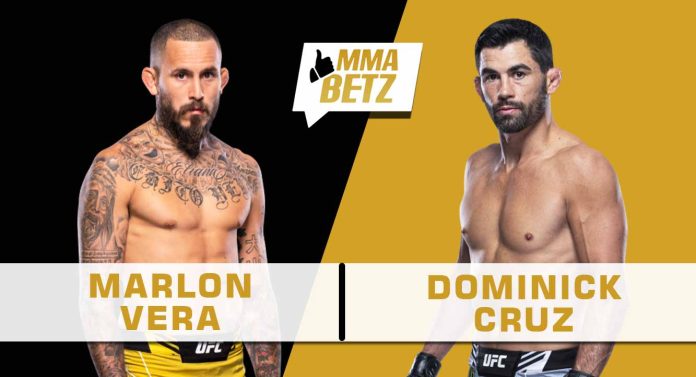 UFC San Diego goes down this weekend at Penchanga Arena in San Diego, California. In the main event, Marlon Vera and Dominick Cruz battle it out in a potential title eliminator.

Cruz, a two time UFC bantamweight champion who is regarded as the greatest 135 pound fighter in the history of MMA, is looking to make his way back to the top again. ‘The Dominator’ is a very capable striker with unorthodox movement and in-and-out striking, which his opponents find extremely hard to deal with. He’s also a very underrated grappler. Vera is a fantastic striker, who hits really hard and has a range of tricks up his sleeve. He’s also a very capable grappler.

The Ecuadorian is younger and the more active of the two fighters, so it’s likely that he will have the edge as far as conditioning is concerned. Vera will have momentum with him, but Cruz is a tricky test for anyone in the division, even at 36 years old. It will be an extremely close fight, with Vera winning the early exchanges, but Cruz will use his experience, especially in the latter rounds, to churn out a decision win.

Who do you think will win the UFC San Diego main event between Marlon Vera and Dominick Cruz?