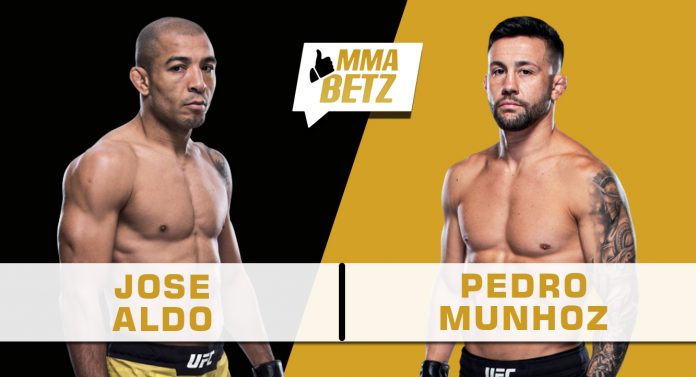 UFC 265 goes down this weekend at the Toyota Center in Houston, Texas. In the co-main event, former featherweight champion Jose Aldo locks horns with Pedro Munhoz in an all Brazilian affair.

After losing three in a row, Aldo returned to winning ways against Marlon Vera in his most recent fight at UFC Vegas 17. Munhoz also made his way back into the win column with a victory over Jimmie Rivera at UFC Vegas 20.

Aldo is a very polished striker, with vicious kicks. He also has a world-class grappling skill set, but Munhoz is also an extremely well-rounded fighter, with crisp boxing, leg kicks, and submission skills. While their skill sets are very similar, both Aldo and Munhoz approach their fights differently.

Munhoz relies heavily on calf kicks, which won’t work as well against a Muay Thai specialist like Aldo. In fact, ‘The King Of Rio’ will be the one picking his opponent apart with leg kicks at range. Aldo will also enjoy a five-inch reach and three-and-a-half-inch leg reach advantage, which will make it easier for him to implement his game plan.

We may not see a lot of grappling action as both fighters are high-level grapplers and should cancel each other out, but Munhoz might try to take the fight to the mat if he fails to neutralise Aldo on the feet.

All in all, Aldo has the edge overall and should get his hand raised at UFC 265.

Who do you think wins the bantamweight co-main event between Jose Aldo and Pedro Munhoz?