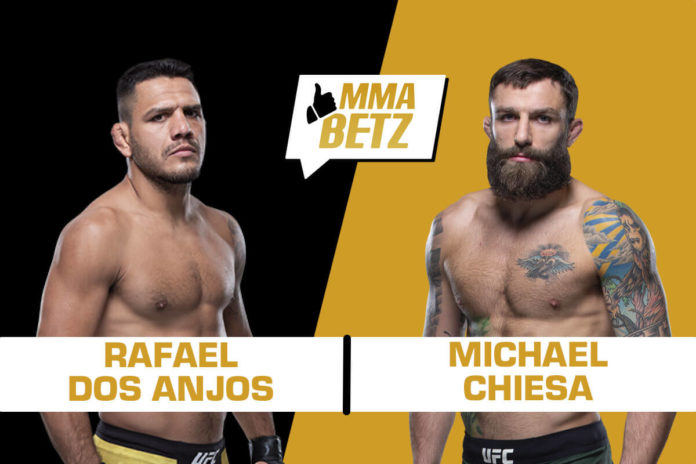 We have an epic welterweight co-main event this weekend at UFC Raleigh between former top UFC lightweights Rafael dos Anjos and Michael Chiesa. Both of these guys moved up to welterweight recently in their careers, dos Anjos back in 2017, and Chiesa in late 2018, and both are much better at this weight. Dos Anjos is of course the former UFC Lightweight Champion, and Chiesa won The Ultimate Fighter 15, going 4-0 on the show before submitting Al Iaquinta in the finals.

The odds for this bout have dos Anjos as a pretty sizeable favorite, with himself at -275, and Chiesa at +235. This means you would need to bet $275 on dos Anjos to win $100 with a win, and you’d need to bet $100 on Chiesa to win $235 with a win. Though dos Anjos is the favorite, these should perhaps be a little bit closer. Chiesa is 2-0 since moving up to 170 lbs, and his wrestling and grappling is some of the best in the sport.

With that being said however, dos Anjos only loses to the elite of the elite; he hasn’t lost to a sub par fighter since he lost a split decision to Gleison Tibau back in 2011. ‘RDA’ also holds a third degree black belt in BJJ, while Chiesa has been a purple belt since he was on The Ultimate Fighter. He probably just doesn’t train in a gi anymore, and though he’s been submitted before, he’s submitted opponents like Jim Miller, Carlos Condit, and Beneil Dariush, all of which are BJJ black belts.

Kevin Lee is a great wrestler, and aside from the striking, has a similar style to ‘The Maverick’. He goes for the takedown, looks to take the back, and looks to choke his opponents out, or at least control them. Lee couldn’t do that to dos Anjos, and he was able to do that to Chiesa when they fought. That’s an interesting sequence to think of when placing a bet on this fight.

This will be a very telling fight, we should see exactly where each of these two are afterward. Who will you be betting on?