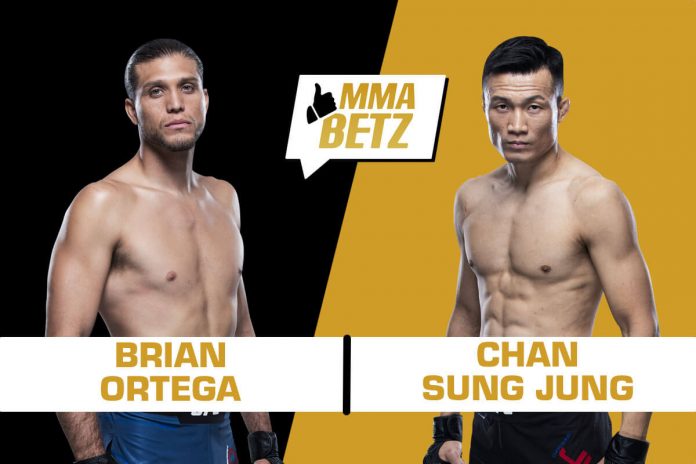 A long-awaited featherweight matchup headlines this weekend’s UFC Fight Island 6 card, when Brian Ortega goes up against ‘The Korean Zombie’ (Chan Sung Jung). Earlier this week, UFC president Dana White confirmed that the winner will challenge Alex Volkanovski for the title next.

Both 145 pounders are well versatile in all aspects of the fight game. And although ‘The Korean Zombie has eight submissions to his name, including one of only two twisters ever seen in the UFC, Ortega will have the advantage on the ground. And although he scored a spectacular knockout of Frankie Edgar at UFC 222, ‘T-City’ is best known for having one of the slickest BJJ games in the promotion.

Both men have been away from the Octagon for quite some time, due to injuries and surgery. ‘The Korean Zombie hasn’t fought in ten months, since he knocked out Edgar at UFC Busan. Ortega was originally scheduled to meet the 33 year old in the main event but injured his knee a couple of weeks out from the fight. After beating ‘The Answer’ in his home country, Jung underwent eye surgery.

For Ortega, he hasn’t fought in almost two years, since losing his title fight against the then champion Max Holloway at UFC 231. The 29 year old will also be without Rener Gracie in his corner, after he tested positive for COVID-19.

Going into UFC Fight Island 6, the odds have ‘The Korean Zombie’ as the favourite at -185. While Ortega is the +160 underdog.

Who do you think will have their hand raised at UFC Fight Island 6, Brian Ortega or ‘The Korean Zombie’?