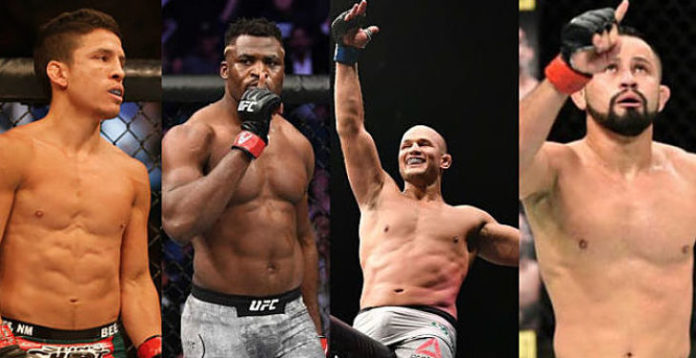 Tonight the UFC comes to Minneapolis, Minnesota, for UFC on ESPN 3. We have former UFC Heavyweight title challenger Francis Ngannou returning to ESPN to take on former UFC Heavyweight Champion Junior dos Santos. Two of the hardest hitters ever in the sport; one is recorded as the hardest hitter, and the other has better boxing fundamentals than 95% of mixed martial artists today, with 15 of his 21 wins coming via knockout.

Both Ngannou and dos Santos have around a 70% knockout ratio actually, considering nine of Ngannou’s 13 wins are knockouts as well. We thought for a little while there that dos Santos might be done, that his best days were behind him, he went from 15-1 to 18-5 from late 2012 to mid 2017, being finished in three of those four losses. We’ve seen in his last three fights that isn’t the case, he still has some fight left; same with Francis, after he lost to Stipe Miocic, he wasn’t the same against Derrick Lewis, and now he appears to be back at 100% as well.

This fight will most likely be a title eliminator, and we also have another title eliminator on the card, as Joseph Benavidez rematches Jussier Formiga at 125 lbs. There are some pretty important fights tonight, and that’s just the last two of the night. All twelve fights will be on ESPN starting at 6pm ET. Fight Card posted below:

Francis Ngannou def. Junior dos Santos via KO (punches) at 1:11 of round one

Joseph Benavidez def. Jussier Formiga via TKO (head kick and punches) at 4:47 of round two

Drew Dober def. Marco Polo Reyes via KO (punch) at 1:07 of round one

Alonzo Menifield def. Paul Craig via KO (punches) at 3:19 of round one

Eryk Anders def. Vinicius Moreira via KO (punches) at 1:18 of round one

Dalcha Lungiambula def. Dequan Townsend via TKO (punches and elbows) at :42 of round three

Maurice Greene def. Junior Albini via TKO (punches) at 3:38 of round one