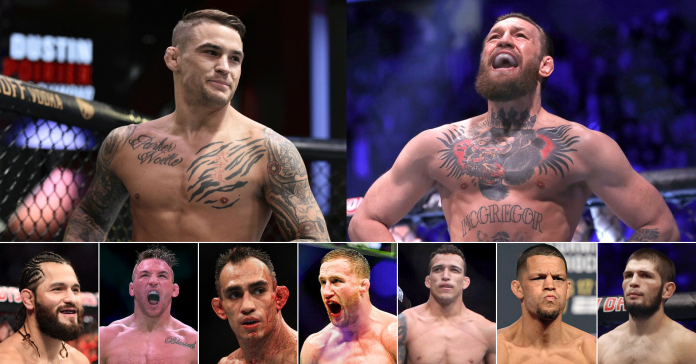 Conor McGregor’s highly-anticipated return to the Octagon didn’t go as planned as Dustin Poirier stopped him via second round TKO at UFC 257.

McGregor was a sizeable favourite going into the fight, and started out aggressively, but Poirier mixed things up well to neutralise his opponent’s strengths, before inflicting decisive damage himself.

Poirier said he is open to a trilogy fight with McGregor, who also wants an immediate rematch with the title on the line. However, there are a lot of interesting matchups for both in the lightweight division, in case they fail to run it back immediately.

According to sportsbook, Nate Diaz is the favourite to fight McGregor next, followed by Poirier, Justin Gaethje, Tony Ferguson, Michael Chandler and Charles Oliveira.

Diaz and McGregor have already competed twice, at UFC 196 and UFC 202, and are tied at 1-1. The same is the case with Poirier, however, the Louisiana native is in a strong position to fight for the belt next, so an immediate trilogy bout may have to wait.

Chandler, who stopped Dan Hooker in the first round in the co-main event of UFC 257, is the favourite to fight Poirier next, followed by Oliveira, McGregor, Khabib Nurmagomedov, Diaz, Gaethje, and Ferguson.

Poirier is the favourite to be the UFC lightweight champion by the end of 2021, and there’s a solid reason why. In the last four years, he has fought nine times and only lost once, to Khabib.

He has defeated the likes of Eddie Alvarez, Max Holloway, Gaethje, Hooker, and now McGregor, and many believe he’s the best lightweight on the planet after the undefeated Russian.

Who should Conor McGregor and Dustin Poirier fight next, and who do you think will be the UFC lightweight champion this time next year?